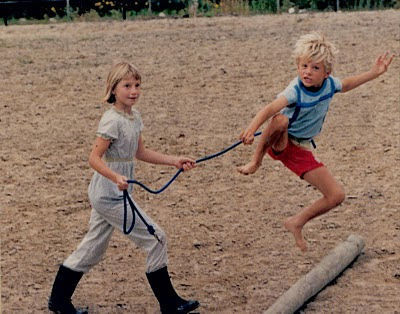 Pictured here with big sister Brook!!  Compliments of that trouble maker, Ross Martin.
Posted by Lisa Thomas at 10:33 AM No comments:

Congratulations to the Wintersteins on Purchasing Steady Eddie

I’d like to congratulate George and Gretchen Winterstein from Unionville, PA for coming in and becoming owners of Steady Eddie, my most recent import from Australia. Gretchen and George are no strangers to owning top horses: Gretchen rides in the first flight of the Cheshire Fox Hunt and has owned many steeplechase horses, and George loves competition, too: he’s a retired race car driver.

The Wintersteins also own Ringwood Murphy, a training level event horse that has been imported from Ireland and is going to end up a fox hunter for Gretchen. We’ve started him eventing because she feels like it will be a good education for him before he starts his fox hunting career.

Steady Eddie’s eventing debut comes this weekend in the BN at Plantation Field HT on Saturday, so we’re all about to see if he lives up to my high expectations.

-Boyd
Posted by Amber Heintzberger at 3:20 PM No comments: 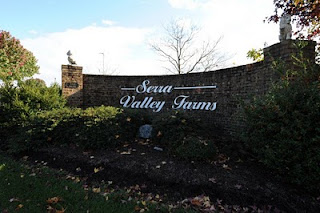 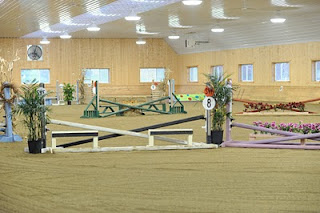 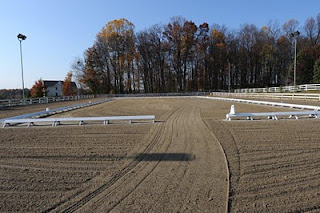 Serra Valley Farms is pleased to announce that International Eventing and Dressage competitors Boyd and Silva Martin are holding their first Eventing Training Camp at their facility, located in Mount Airy, Md.  Boyd and Silva will share their knowledge, skills, experience and training techniques with all of the participants in both a group setting as well as one on one instruction.

The camp offers instruction from Elementary level through Prelim levels.Attendees are asked to please have their horses in top condition as this will be three days of riding instruction, course work, jumping and a mock Event to round out the camp.

The camp is offering:

Serra Valley offers a state of the art equestrian facility that is a luxury resort for your horses!  Come join the fun & take your riding to the next level!

For more information on the event, please visit the Serra Valley Farm's website!

Posted by Lisa Thomas at 8:18 AM No comments:

It was a successful weekend for Silva and three of her horses at the Horse Park of New Jersey, winning every class on every horse she entered. Silva says:

Jeff has been working really well; I took him to Jessica’s last week and she was really pleased with him. He feels like a real Grand Prix horse now! His passage is getting stronger.

I warmed up at 8:30 and he felt good and I went to the ring, but they wanted to squeeze another horse in before me. The problem is when he’s ready, he’s ready! So I went back to the warm up ring and walked a bit, and then they said they’re not going to run the other horse! He does need to learn to deal with things like that and grow up a bit, so even though it was not good for us this weekend it was part of the learning curve.

He was good in the piaffe and passage but he usually never makes mistakes in the changes, but he made some in the 2’s and while the one’s were beautiful, we had too many. He also got a little long in the canter; it wasn’t as accurate as the last Grand Prix we did. We still won the class but didn’t have much competition, so it was a little disappointing and he needs to learn to deal with things like that. He still feels awesome and I’m excited to keep doing the national shows so we can make little mistakes like that and he can keep learning.

The last show at Blue Goose, Sea Lord was much better in the canter. He’s getting so much stronger but he needed to be more uphill and learn to sit, so the weeks between the shows I worked on the canter, hardly trotting at all, and he’s gotten stronger and stronger. I think this time he did the best test ever - and we’ve been together for a couple of years now. He kept a big trot through all the movements, including half-pass which is where he tends to lose it. He has that big fancy trot that can get weak in the lateral movements but he was really flowing through all the movements. I need to get the changes straighter and little things like that but he won a very competitive class with a lot of horses so I was very excited for him.

Fiona was great. At the last show she was feeling the pressure of doing dressage every day and not being an event horse any more, and she was just a little green in the movements. This weekend she hardly made any mistakes – she moved beautifully and is very soft and not spooky or anything. She won on a really good score. She is for sale and I think she will be a great horse, even for an amateur, because she’s so easy and calm. Even for someone who’s nervous she just carries on. She’s really a beautiful horse, too. I’m planning on doing a few more second levels just to keep her confident but she’s training third level at home so I will move her up sometime soon.

Our next show will be Bucks County this weekend with Comet (Fourth level) Rosa (training) and Wie von Anderen Stern, or “Willy” – he’s Denise and Michael Rocco’s horse who was imported from Germany and I’ve had him for a few months and have been building a relationship with him. He’s doing third level there.
Posted by Amber Heintzberger at 10:39 AM No comments: