A Visit from Devoucoux 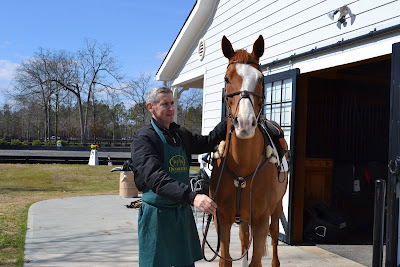 We were very honored that Jean-Michelle Devoucoux made the trip from France to visit us here in Aiken. Jean-Michelle is the founder and owner of the Devoucoux saddle company from Biarritz, France and is the backbone of the company that provide the world's finest saddles. Jean-Michelle not only is the manufacturer of Devoucoux saddles, but used to be a top event rider in France back in his day so he a special passion deep down inside for eventing. 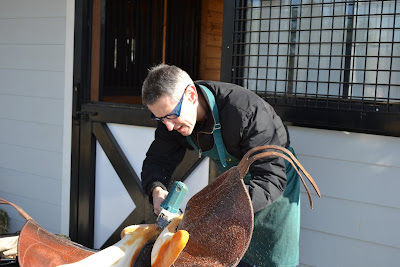 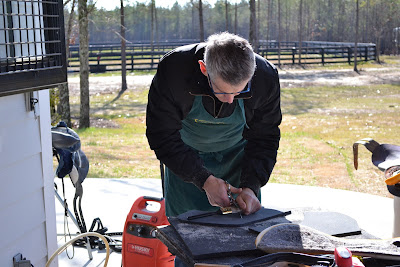 Jean-Michelle spent the day specially fitting a couple of saddles to some of the four-star horses, including Neville Bardos. Neville's back muscles have changed with all the dressage work he has been doing, and Jean-Michelle made a few minor adjustments to make sure that Neville is able to jump and move with freedom and comfort. 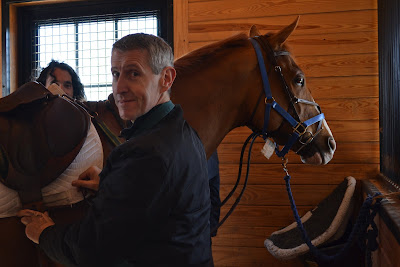 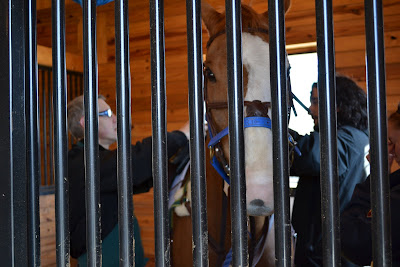 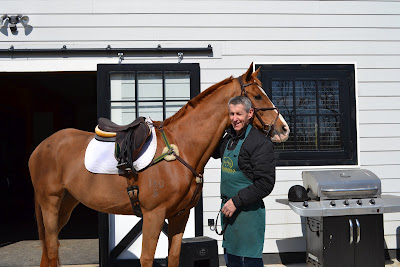 Anyone in the Aiken or Ocala area who is interested in any of the Devoucoux saddles or tack should get in touch with Devoucoux's champion sales rep, Eric Leyssalle, 571-233-6606.

To check out the entire range of Devoucoux products, visit www.us.devoucoux.com.
Posted by Amber Heintzberger at 9:09 PM No comments:

3:45 FINISH
Posted by Amber Heintzberger at 8:13 PM No comments:

Our friend Cindy Lawler was behind the lens at Paradise this weekend & sent along another magnificent group of photos.  We're so appreciative to Cindy & all of her contributions.  Enjoy the photos! 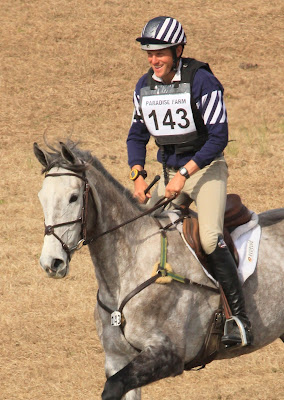 We had another solid weekend of eventing over the last few days at Paradise Farm Winter Horse Trials in Aiken. Several of our young, up-and-coming stars were out competing, as well as a couple of wonderful horses that we have available for sale. The horses did not disappoint, and it was a good outing for all. We enjoyed the company of several owners who came out to cheer us on, and welcomed Abbie Golden, who took a short break from studying at college in Pennsylvania to compete her horse, Spenser, in the Open Preliminary division.

A big congratulations goes to George and Gretchen Wintersteen for their lovely Irish horse, Ballyneety, who won the Open Novice B division! This is the second straight win for this horse following a win at Full Gallop Horse Trials last week. We are excited about the future for this horse after the wonderful beginnings of his American career here in Aiken!

We have a great group of horses for sale, including Freedom's Pride, Bacardi and Ladylovesdiamonds, who all had a successful weekend and look to be strong eventing candidates. Contact Boyd if you are interested in any of these fabulous horses.

Our thoughts are with Denise Lahey and Pierre Colin, who tragically lost their horse, SBF Zamboni aka "Mick", over the weekend. Please know that we are thinking of you during this difficult time.

Results are as follows:
Open Preliminary

Fergus Himself, owned by Bonnie Stedt and ridden by Sara Gumbiner, 11th