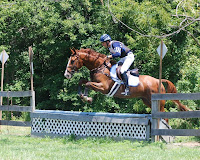 Boyd and Silva conducted a clinic at Morven Park in Leesburg, Virginia November 15-16, 2008. Silva taught dressage lessons on Saturday and Sunday, while Boyd taught show jumping on Saturday and cross-country on Sunday. About 30 riders, ranging from beginner novice to preliminary level, took part in the weekend's activities.

Boyd said, "The dressage was luckily indoors because conditions were pretty rough; it rained a lot on Saturday and it was bloody cold all weekend. Silva worked with riders on the tests they'll compete next season. In the show jumping I worked on rideability and adjustability, with a lot of lines with turns and courses that included sharp turns and jumps without too long an approach.

"On Sunday we used the schooling field, which is about 30 acres with about 100 fences. It was the first I've seen of it and the footing was perfect. We had three or four falls that day, not a bad effort with that many ride. I was lucky enough to sit on Melissa Stubenberg's four-year-old gelding, who was last year's Future Event Horse Champion (pictured above, Boyd on "Prince" at a horse trials during the summer, photo courtesy of Meillissa Stubenberg). He was a little full of himself, which is why I rode him, but he's a nice horse with a good future in front of him.

"The general consensus was that it was a great idea for a clinic, and we're talking about doing another one in the spring. Next weekend I'm teaching another clinic, in Millbrook, New York, while Silva keeps things running at home."
Posted by Amber Heintzberger at 9:20 PM No comments: