A Focus On Safety 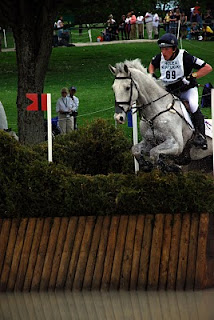 The following is an article that I wrote for the Rolex Website.  After Oliver Townend's fall, I was able to catch up with him in England, and we spoke about the Point Two Pro-Air Jacket, which clearly prevented his accident from being catastrophic.  Boyd is sponsored by Point Two USA, and I'd like his fans to become educated about this life saving device!!

Anyone who participates in, or follows this sport, knows that there has been a tremendous spotlight on safety due to the high profile falls that have occurred over the past several years. When I first arrived at Rolex, my assignment was to interview three riders and to produce three articles with a personal twist. The first was Debbie Rosen, an amazing woman who has battled breast cancer & finished her last round of chemo therapy 6 weeks prior to Rolex. The next was an interview with Buck and his reflections on Rolex and The Horse Park, as a son to an eventing legend & as one of the top level competitors in his own right today. My final interview was to be with Oliver and I planned to reveal more about his childhood & his atypical rise to stardom in the horse world.

After Oliver’s fall, the media center was buzzing with phone calls & concern regarding his condition. We tried to interpret the incoming texts & calls from our inside sources in an attempt to determine what was fact & what was a bi-product of the rumor mill. I had been at the head of the lake during his fall (see attached photos) so I wanted to see the footage of the actual incident. Kat Netzler of The Chronicle put me on to some photos which captured the entire event sequence & quite honestly I was shaken. It’s a very emotional experience when a member of the eventing community doesn’t make it through the finish flags. Every photographer & journalist who witnessed the fall stated that it was a miracle that he was alive.

Our sport has undergone grueling scrutiny over the past few years and everyone involved has taken on the task of improving safety standards. This sport is unified by a fraternity of riders, event organizers, owners and fans who want to see all competitors and horses given the best chance of walking away from an accident. This is why we’ve seen improvement in course design with frangible pins and break-away obstacles. One product which has been recently introduced on the market is an inflatable air jacket, which in Oliver’s case, may have saved his life.

When I first was introduced to the Point Two Pro Air Jacket, I was with my client Boyd Martin at the USEA convention in Reston, Va. The Point Two Pro Air Jacket had just been recently brought to market in Europe by the company founder Lee Middleton. Boyd was being offered the opportunity to be sponsored by Point Two USA, a subsidiary of the British parent company, with distribution rights here in the United States. Craig Martin & Sharn Wordley, both world class show jumpers and business partners from New Zealand, launched the marketing efforts of Point Two USAhttp://www.pointtwousa.com at Fair Hill International during the fall of 2009. Since then they have made great efforts to educate the public about the life saving protection of wearing a Point Two Pro Air Vest.

When I witnessed the deployment of the product at the convention, my first reaction was, “This is just a no-brainer!” Why not introduce a wearable safety device that gives riders the same protection as an air bag in your car. I contemplated buying one of the vests for myself, a lifelong rider who’s recently switched from 20+ years in the hunter ring back to eventing. After all, we’ve all read about riders who have had catastrophic accidents over a small warm up fence or while they were walking back to the barn.

This afternoon I was finally able to catch up with Oliver for that interview that never took place during Rolex. Through the orchestration of the British publicist for Rolex and Lee Middleton of Point Two, I was able to connect with Oliver for that final interview. The focus of the interview had clearly shifted from a personal account of his road to Rolex, to a celebratory affirmation of his ability to travel home to England. “Without a shadow of a doubt, I’d still be in a hospital in America, and not back in England, if it hadn’t been for this unbelievable product.” Oliver is now sore with some injuries that will keep him grounded for 21 days, but it’s simply miraculous that he’s even walking around after reviewing the photos from the actual fall. Clearly the Point Two Pro Air Vest had saved him from a catastrophic injury.

Oliver had been wearing the vest during an earlier fall at Livington Manner (Advanced) last year, where the deployment of the vest had enabled him to be back in the tack to ride at Badminton. Oliver emphatically told me “This product offers immense steps forward in safety for our sport, and NO ONE should go out cross country without one.”

Article and photos are the property of Lisa Thomas Mid-Atlantic Equestrian Services. Not for reproduction without permission.
Posted by Lisa Thomas at 8:24 AM 1 comment:

A few words with Boyd about his phenomenal Rolex experience:

I had a fantastic day in the show jumping ring with all three horses. My first ride of the day was Remington, who has had some disappointing show jumping rounds in the past, but I had a feeling he’d have a good round because he was so fresh and pulled up well after cross-country.

I was lucky enough to have the US’s best show jumping rider Lauren Hough walk the course with me and warm me up. I worked with Lauren in Wellington this year with all three horses so she knew them well and I must say she prepared them well. Remi jumped his socks off with ease, class and style and was heading to a clear round 'til the third to last fence, which was a vertical with a camera underneath it, and the shutter sounded like a machine gun under the fence. It spooked Remington and made him jump a little sideways and knock the rail down, but that was his only trouble and I couldn’t have been happier with his first four-star result, finishing in 12th place.

Bruce Davidson’s Rock on Rose was the second ride of the day; she was fit as a fiddle and sound as a pound at the final jog-up and went in and performed her usual exceptional self in the show jumping. I made a little bit of a mistake in letting her get a little long and strung-out and had the C element, the oxer, down, when she chucked it with her toes. She finished eleventh which was a huge effort for the mare after a little bit of a scratchy start to the year, with me falling off at her first event and then finishing last after dressage at the next one. To finish eleventh at one of the toughest four-stars in the world is a huge accomplishment for this young mare. My good friend James Alliston started her for Bruce before he moved out to California; he'd competed her to advanced level when I got the ride, because Bruce already had enough horses to handle. We've been together right on about 12 months now.

Neville jumped possibly the best he’s ever jumped. Again, much of this has to do with Lauren Hough. Not only was she helpful in the warm-up but also schooling the horses in the morning after the trot-up she got me to do some small bounces with Neville, which really got him thinking about show jumping more than the cross-country phase. I really think that Lauren’s expert advice, getting him back up in the morning and giving me all the tips for riding the course, made Neville jump better. Neville never thought of touching a rail and cruised around, earning himself $25,000 and a fourth-place ribbon.

Monday morning I spent half the day with the United States Equestrian Team entourage and we had a one-on-one show jumping critique with US team coach Katie Prudent. We also went through the video of our dressage tests with Marilyn Payne and Christian Landolt. I found this quite a good learning experience, and got the understanding that there’s still room for plenty of improvement with all three horses. The US team vet Brendan Furlong went over the horses with a fine tooth comb and no significant injuries were incurred at this competition.

Obviously the WEG is on my mind now. I think I’m by no means on the team yet and we still have a long way to go and I still need to keep improving the horses and keep them healthy so that I have a good chance to wear the Stars and Stripes in September.

Now it’s time that I take my prize money to the casino at Atlantic City to see what I can do!

-Boyd
Posted by Amber Heintzberger at 6:16 PM No comments:

Check out these links for some Rolex Kentucky action:

The following videos are courtesy of Ecogold

Neville at the Jog

Remi at the Jog
Posted by Amber Heintzberger at 6:11 PM No comments:

Fourth Place for Neville at Rolex Kentucky CCI****, All 3 Horses in Top 12! 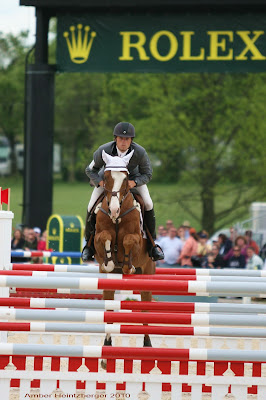 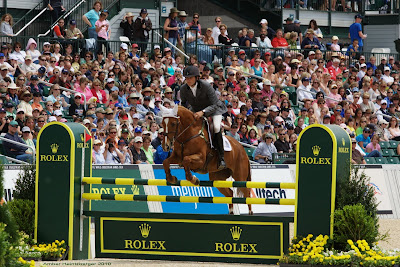 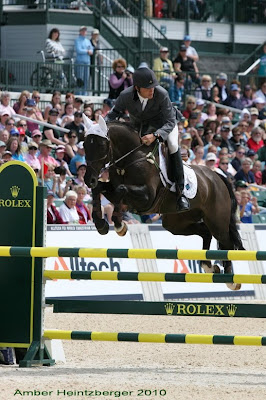 It was a fabulous weekend for Boyd and his three horses at Rolex Kentucky! With more horses entered than any rider, Boyd posted three clear cross-country rounds and finished in the top twelve with all three horses. In spite of a packed stadium today, ominous storm clouds on the horizon and the pressure of the WEG selectors looking on, Boyd really pulled out all the stops and gave his horses the Rolex experience that each of them deserved.