Caitlin and Silva took the horses to the recognized dressage show at Blue Goose Stable on Wednesday and had a great day out with all the horses!

Rosa Cha W was first on in the morning. She did training level test 4 and she was awesome! This was only her second show and she was already acting like she has been doing this all her life. At the first show she was very hot and excited in the warm up, but this time she was all business. She did a beautiful test and won with 70.8%! 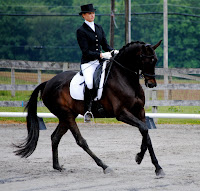 Jeff the Chef W was my next ride of the day. Jeff did his third Grand Prix and still has not been beat! I am so exited that he is trying so much harder for me this year than he did last year. He went very well in the ring and did not have any major mistakes. Of course we still have a lot of work to do to make the test perfect but that will come with time. He still needs to get much stronger, which is why I am just going to do national shows this season so he has enough time to develop into a spectacular Grand Prix horse. We won with 65.5%! 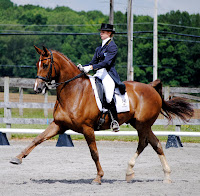 Jeff the Chef
My third ride of the day was Sea Lord. Sea Lord did the Intermediate 1. I was very happy with him because after the last show I have been working on the canter work a lot and he was soooooo much better. He still struggles to really sit in the canter but he is getting it! I know it! Sea Lord won his class with 67.3%.


Next was Amoure, who did first level test 4: Amoure did a very good test and got third place on 69.7%. 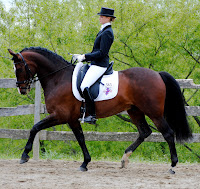 Fair Fiona W was my next ride for the day and did second level test 3. Fiona is still a little green but she was trying very hard for me. I very much enjoy riding this beautiful mare. She is so elegant and eye catching and very brave anywhere she goes. Nothing fazes her. She finished fourth on 65.8%. 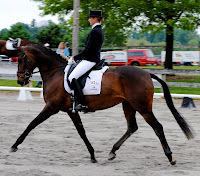 My last ride of the day was Comet . He did fourth level test 3. This is only the third time that we did this difficult test; the first two times he got a little confused but this time he knew where we were going and was much more confident. We still have work to do but I was very happy with him. Comet won his class with 60.8%.


My student Claudia Schulz took her beautiful Friesen, Eise, in first level test 4 . This is a very nice horse and I very much enjoy working with Claudia and Eise!

Thrills and Spills at Fair Hill

This photo of Neville Bardos and Boyd competing at the 2010 Rolex Kentucky three-day event received the most votes in the Club Equestrian Photo Contest sponsored by Dubarry of Ireland. The photo was submitted by Club Equestrian member "Jumpthat".
Posted by Amber Heintzberger at 8:50 AM No comments: