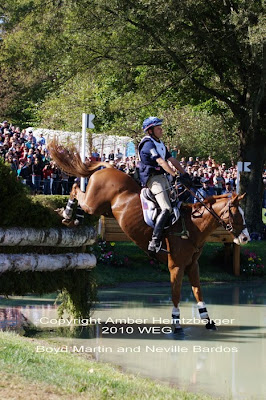 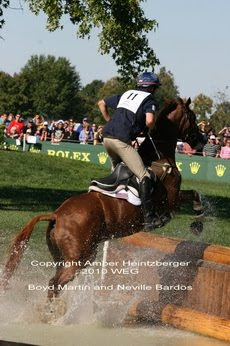 Boyd and Neville took no prisoners as the trailblazers for the US Eventing team at the Alltech FEI World Equestrian Games today. They galloped around all the direct routes clear and in the time, laying down a good foundation for the team - and Boyd even gave Neville a big hug after he cleared that giant water complex - but luckily didn't fall on his head! Karen, Phillip and Becky posted clear rounds as well, though Buck had an unfortunate run-out at the sunken road - fortunately the team could drop one score and since it was a rough day for many competitors, with three solid rounds team USA moved up to second position behind Great Britain and just ahead of Canada. Becky and Comet put in a textbook performance to stand in the silver medal position individually going into Sunday's show jumping.

After his ride, Boyd said, "Neville was full of life and ran very well today. It wasn't the smoothest round ever but he showed toughness and determination to go clear and in the time at our first WEG. It was good going out first because I could take the direct route to every fence. It was definitely a bigger course than I've jumped before!"

Boyd spoke with the US team's show jumping coach Katie Prudent to develop a game plan for the final phase of the event tomorrow. He plans to school Neville on the flat and give him a short jump school in the morning to loosen him up and get him balanced after galloping around today, and hopefully jump a clear round in the afternoon.

Commenting on the atmosphere of riding in front of the more than 50,000 spectators that packed the Kentucky Horse Park today, Boyd said, "Riding in front of literally tens of thousands of people yelling and screaming all around is something I've never experiences before. It was an intense experience."

Both Boyd and Silva's parents and other friends and family are visiting and he added, "Now we've got the Australians and Germans and Americans all together and we plan to have a good celebration tonight!" 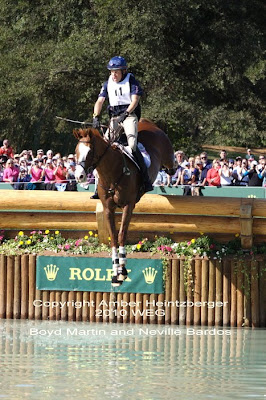 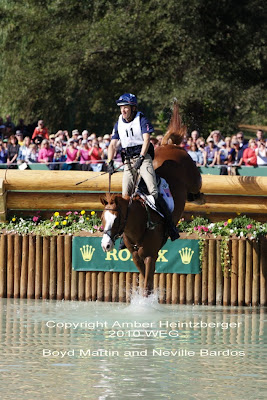 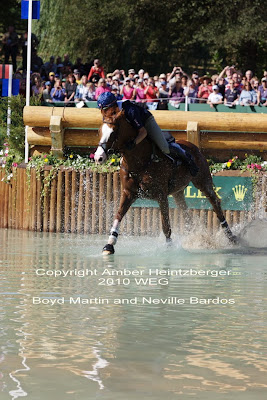 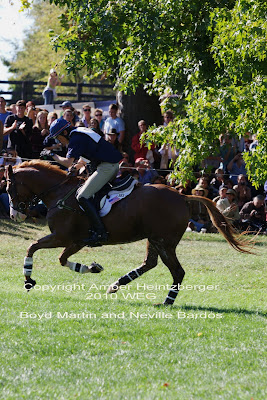 Boyd and Neville clear and in the time on cross country - way to blaze the trail for team USA! Photos and commentary later today.
Published with Blogger-droid v1.5.9
Posted by Amber Heintzberger at 11:05 AM No comments:

Come Join Boyd in the BOB Tent at 1pm! 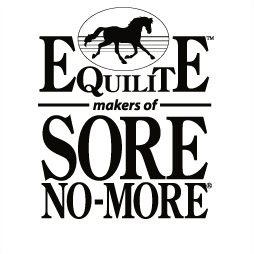 Come join Boyd and his sponsor, Equilite, in the Bit of Britain tent, near the stadium, at 1pm this afternoon.  There will be plenty of time to be out on course to cheer on Buck, then hoof it back to the BOB tent to support our sponsor Equilite.
Posted by Lisa Thomas at 9:20 AM No comments:

Boyd and Neville are scheduled to run cross-country today at 10:44am. Come out to the Horse Park and cheer them on! 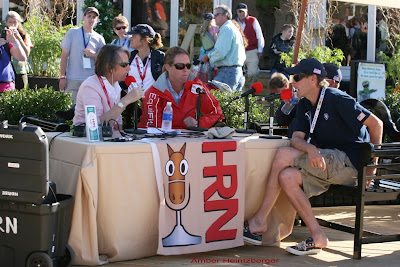 On Friday Boyd was interviewed by Chris Stafford on The Eventing Radio Show. Be sure to tune in as Boyd, Buck Davidson and Amy Tryon as well as a few of Boyd's mates from Australia talk with Chris about eventing at the WEG!
Posted by Amber Heintzberger at 7:40 AM No comments:

This is a youtube video clip from a movie about the real Neville Bartos. It is actually taken from the movie 'Chopper', which is a story that revolves around two of Australia's most notorious gangsters: Mark Brandon 'Chopper' Read and Neville Bartos. Neville is a real life gangster in Australia that is currently in serving a sentence in prison.

When I bought the 3-year-old Thoroughbred gelding off the racetrack in Australia for $800, he reminded me of this character. Neville the horse has one crazy white eye, and is always hyped up and looking for action like the real life character. I thought I would play it safe and change Nev's surname to Bardos, though, just in case the real life gangster made it out of the slammer one day and came looking for me for ripping off his name.

Warning.... Neville does use some explicit words in this clip!

-Boyd
Posted by Amber Heintzberger at 8:52 AM No comments:

Be sure to stop by the Devoucoux booth
at the WEG trade fair
tomorrow morning at 11:30
to get Boyd's autograph!
Posted by Amber Heintzberger at 9:44 PM No comments:

http://www.threedaysthreewaysblog.com/2010/09/30/dressage-day-one-video-boyd-martin-and-mark-todd/
Published with Blogger-droid v1.5.9
Posted by Amber Heintzberger at 7:06 PM No comments:

Neville and Boyd in Dressage at the WEG 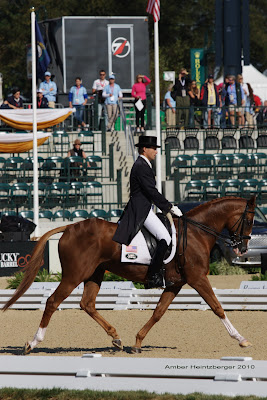 I was relatively happy with Neville’s performance in the dressage today. He warmed up beautifully in the preparations for the test; I also gave him a light ride at 7am and was quite happy with the way he went. 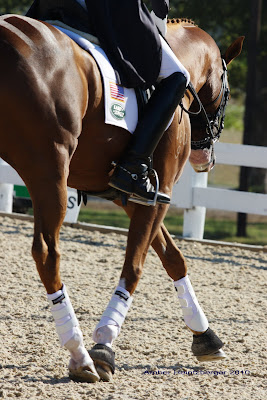 Neville was relaxed in the warm-up 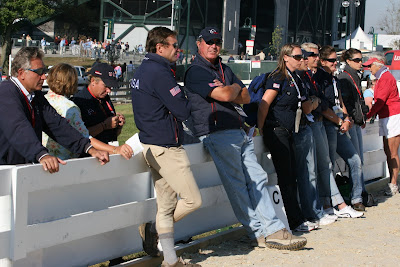 We went into the test and unfortunately when the US crowd applauded Neville got excited before the test. He was very, very tense and anxious but to his credit he went in and did a fairly good test. 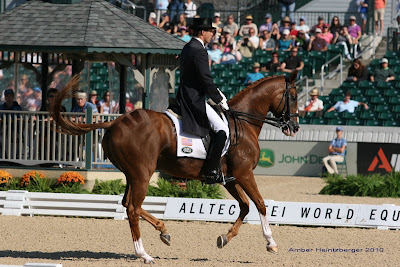 His trot work was was a bit disappointing – tense – but he made up for it with beautiful canter work and scored a personal best in the four-star test with a 49. 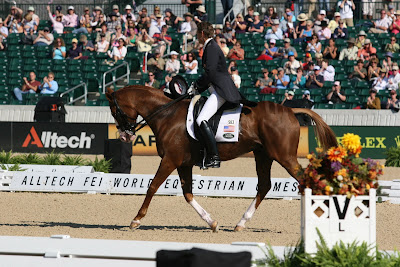 We anticipated that he’d be tense so Oded and Captain Phillips told me to go in rising trot around the ring to keep his back soft; that seemed to work until the applause but I have to give him credit, he’s born and bred for racing and here he is at the WEG trying to be a dressage horse and finds it a bit tough. 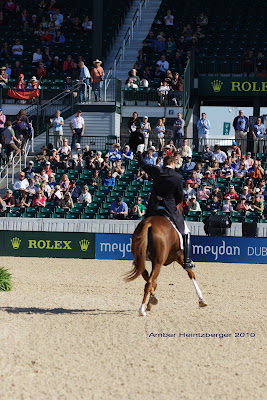 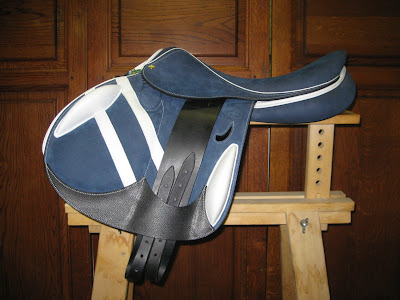 Just in time for the 2010 Alltech FEI World Equestrian Games, Boyd has a
brand new saddle from Devoucoux - complete with racing stripes! 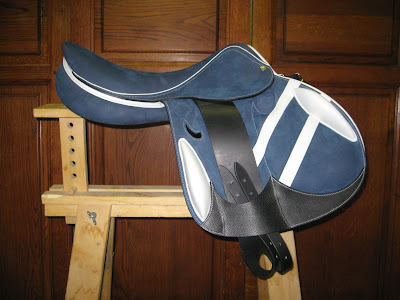 John Thier of EventingNation.com caught up with Boyd today at the WEG. Be sure to tune in and check out the video: 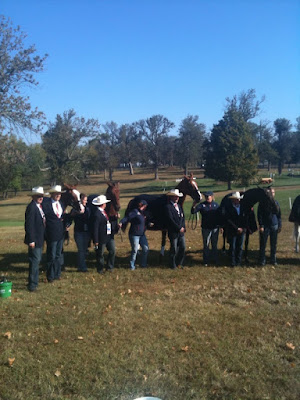 All the members of the US team jogged up this morning. Unfortunately Kim’s horse has been battling a bit of cellulitis in his front leg and she decided to withdraw before the competition started, since she felt the horse was not 100%. Karen has moved into the team spot and America will just run one individual, Becky Holder, now. Unfortunately the door for Arthur or Leyland closed Monday at nine AM, and Kim’s horse was looking good at that stage but then deteriorated 48 hours afterwards.

Neville I rode for about 45 minutes this morning and he was a good boy, but I saw his Thoroughbred fitness side come out at the jog this morning. He got himself all razzed up by the huge crowd at the jog-up. One of the unfortunate sides of Neville is that he was a racehorse and really does react to large crowds and high volumes of noise. This is a bit of a concern for the dressage, keeping him relaxed, as the arena is full of electricity. I took him in yesterday and Neville felt confused that the stadium was Kembla Grange racetrack! I have a second opportunity this evening to take him in and settle him down so I will just do the best I can.

Devoucoux Custom Saddles are created in Biarritz, France, by Jean Michel Devoucoux. A confirmed event rider, Jean Michel made his very first saddle for himself. Indeed, he couldn’t find anything that would meet his demanding needs on the market; saddles that could provide perfect balance, safety and freedom for both horse and rider.

According to Devoucoux, “The Devoucoux brand’s spectacular rise to success has been due to the fact that its range of products meets the needs of riders that have until now been unsatisfied. Devoucoux saddlery products are designed for all riders and all types of mount, whether competition or leisure.

”In less than fifteen years, this ex-apprentice groom from Ciboure, in the Pyrénées Atlantiques, has created a product that has become the world leader in high-end saddles. The Devoucoux image has come to represent luxurious and handcrafted fine French leatherwork throughout the world.”


Devoucoux Custom Saddles are very proud to support Boyd Martin as he strives for a medal with the US Team at the WEG.  Through their partnership, Devoucoux and Boyd share the same core fundamental values: authenticity, hard work, ambition for excellence, humility, passion for horsemanship, and, (as they like to think), a persevering sense of humor! Keep kicking Boyd!

For more information on this company’s history, success and products please visit
www.Devoucoux.com OR PLEASE VISIT THEIR BOOTH AT THE WEG, BOOTH # 216!!

Posted by Lisa Thomas at 2:33 PM No comments:

This photo of Boyd and Silva appeared on Eventingnation.com
Posted by Amber Heintzberger at 11:58 AM No comments:

A Competition of a Different Kind

You know what they say about all work, no play...but don't worry, Boyd's been having some fun as well as working hard in the lead-up to the eventing world championships. Just yesterday the US and British eventers took part in a little competition of a different kind, courtesy of sponsor Land Rover. Click here to read the article.
Posted by Amber Heintzberger at 9:45 AM No comments: 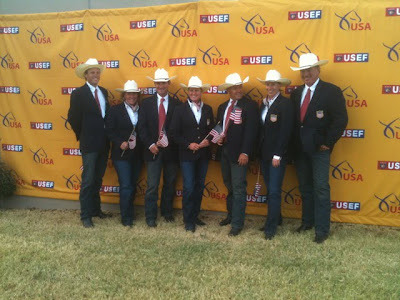 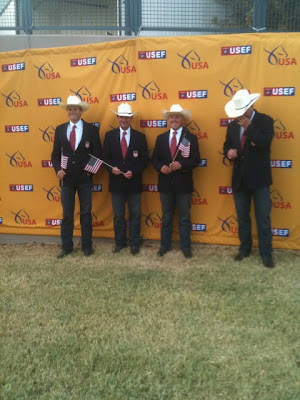 The Men of Team USA
Last night was an incredible evening, the opening ceremony of the WEG, and all the riders and officials got to walk one lap around the ceremonies in the new stadium in front of a full house. The Americans wore a complete Ariat cowboy uniform including boots and a big hat. The opening ceremony was a typical American style: a huge show with a live orchestra, light show, and demonstrations of every equestrian walk of life. 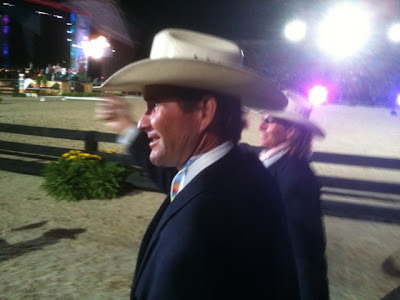 Phillip Dutton and Becky Holder walking in the opening ceremony
It was a great time rubbing shoulders with all the international riders I’ve looked up to for many years as well as a chance to catch up for my old eventing mates from Sydney. 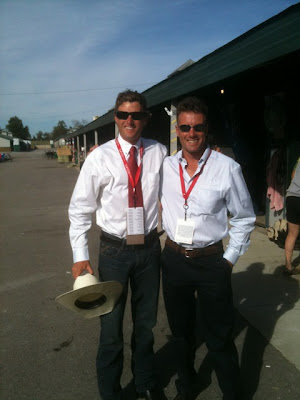 Me with Paul Tapner, Pony Club friend from Australia. 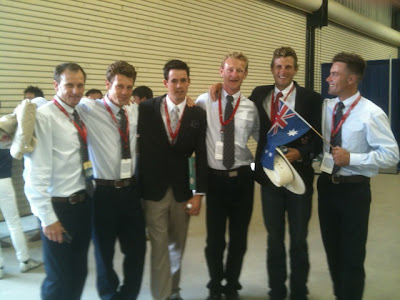 Group shot: All guys that I grew up with in Sydney, L-R: Stuart Tinney, Chris Burton, Jonathan Paget (NZ) Brett Parbery, (Australia dressage) myself and Paul Tapner. First time we were all together since our younger days eventing in Sydney together. 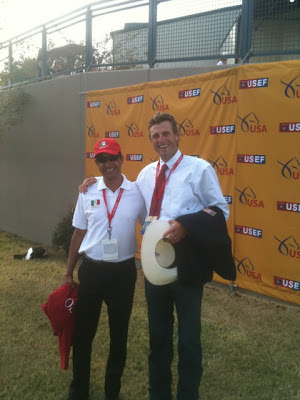 A picture of me with Mexican rider Emspion Mendiville: his horse Azteca and Neville did their first three-star together at Jersey Fresh in 2007, coming last and second to last after dressage, and somehow both ended up at the WEG! 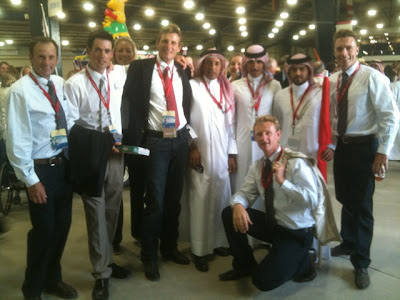 With the Saudi Arabian endurance team
The highlight of the evening for me was when Muhammed Ali did the final lap of honor in a big Cadillac convertible. He was born in KY and the crowd erupted when he made his surprise appearance.

It’s down to business now. Neville’s full of life and it will be fun to ride him twice a day on the flat: it’s dressage, dressage, dressage from here on out. We’ll be first to go of the Americans so it will probably be an early ride on Thursday.