It was a tough day for Team USA, but Boyd and Shammie were undaunted by the misfortune of his fellow American riders as they tackled the cross-country course at the 2014 Alltech FEI World Equestrian Games at Haras du Pin, France this morning. Finishing on 59.9, they are in 9th place going into the show jumping on Sunday.

Boyd told The Chronicle of the Horse: "The bright spot for Team USA came at the end when Boyd Martin left the box aboard Shamwari 4.

“My horse is a real trier,” he said. “My plan was to set out and be really steady and see what my horse had left at the end. In hindsight, I probably should have pushed him a bit more at the beginning because he was full of running at the end.”
Martin was able to move up from 17th after dressage to ninth aboard “Shammie,” adding only 13.6 time faults.
“Coming in I expected this to be the toughest competition in the world, and I think that’s exactly what it was,” said Martin. “I am well mounted on a wonderful horse that has the heart the size of Australia, so I knew it would be a good show.”
Despite his own good result, he was heartbroken for his American teammates. “I feel like we are a team of great horses and great riders,” he said, “but with this course, even the best combinations were having difficulty. I think everyone tried their hearts out, and they should all hold their heads high.”
Posted by Amber Heintzberger at 10:10 PM No comments:

Today went not exactly as planned, but I know it is not a going to be dressage competition this weekend. Boyd and Shami finished dressage on a 46, which is a good score. Unfortunately they had some expensive mistakes in the test today. The judges really wanted to give big marks to Boyd and Shami! The first halt and all the trot work were absolutely stunning, but unfortunately they made a few mistakes in the canter. They scored a 9 for their first halt and things were looking great in the beginning, but they had to pay for the mistakes with a lower score.

I think Shami got very nervous in the final warm up, since it is right behind the bleachers facing the main ring. The horses could hear all the people clapping, but cannot see them.
The nerves from warm-up carried over into the arena.

Oscar (Trading Aces) was so great yesterday for Phillip, and I could not be more happy about that. Phillip rode him amazingly well and they had a really nice test to lead the Americans on a 43.

Tomorrow is going to be difficult for all riders. Fingers crossed for everybody to be safe!

-Silva
Posted by Amber Heintzberger at 3:23 PM No comments:

Posted by Amber Heintzberger at 1:45 PM No comments:

Boyd caught up with Jenni Autry of EventingNation.com after his dressage with Shamwari, where they started off strong but lost a few points along the way. Here's hoping ShamWOW takes on tomorrow's cross-country in his usual fantastic form!


Posted by Amber Heintzberger at 10:04 AM No comments:

Posted by Amber Heintzberger at 8:31 AM No comments:

All US Event Horses Passed the Jog at WEG!

Jog - Check!
Again, the pictures do not do the venue where the jog was held justice. It's unbelievably beautiful!! The weather is still not great, but it stopped raining and it is getting better. Shami and Oscar looked really good working this morning. I will have the ride times for tomorrow shortly and will post them; it looks like Oscar will go tomorrow and Shami will go on Friday.
Fingers crossed! 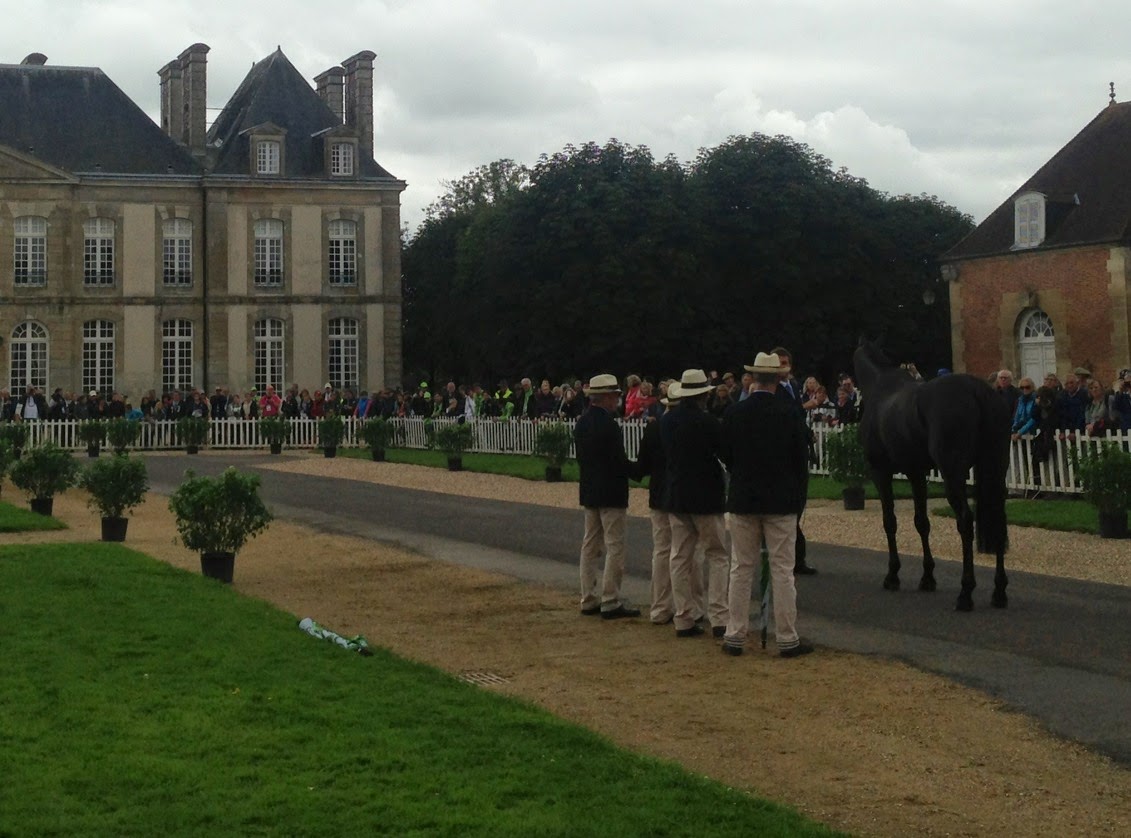 Posted by Amber Heintzberger at 1:46 PM No comments:

We arrived yesterday in Mace, where the WEG Eventing is being held. It was a rainy and cold day, but the horses settled in very well.

The team was announced yesterday: of course we could not be happier that Oscar and Shami are on the team.
They worked lightly but very well today and had a chance to go into the main ring.
The hotel we are staying at is absolutely beautiful, very French and in the middle of nowhere. That is a good thing because it gives the riders a chance to focus and mentally prepare for the competition.

I drove to the Dressage stadium with Mark Hart and Andrea Leatherman today. The drive from the eventing to all the other disciplines is an hour - it's kind of a long way but well worth it!

Posted by Amber Heintzberger at 4:22 PM No comments:

Boyd and Silva Checking In from Chantilly 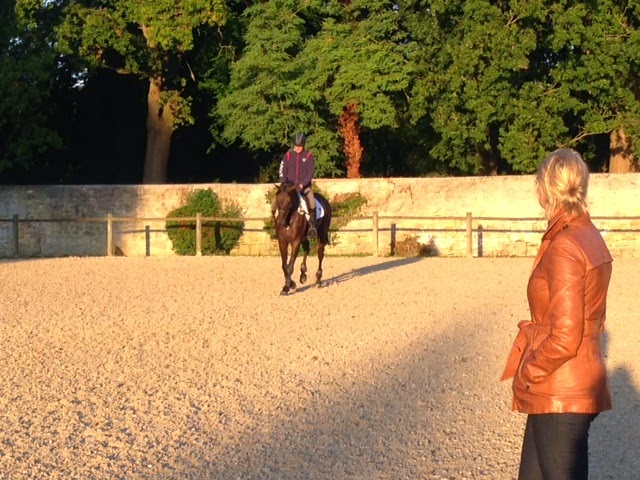 What a wonderful day here in Chantilly! We had an early start, with Phillip jumping at 7 and Boyd at 7.30.

Shami and Oscar look ready to go and in top form! Everybody jumped at the farm the horses are staying at, and then shipped out to the gallop track for their final gallop before the WEG. I was lucky enough to watch it all and most of all I got to see the unbelievable racetrack in Chantilly. The pictures do not do it justice. It is so pretty and the American team could not be luckier to be able to gallop the horses on it! 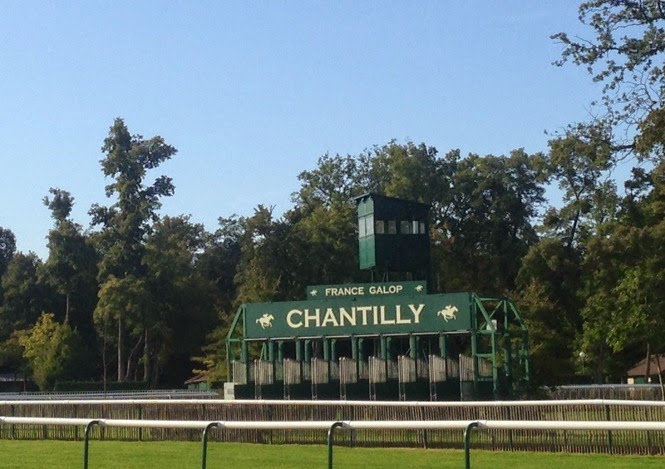 I love the farm too, though it was pretty cold this morning. I am not use to that since has been so hot at home. The weather is perfect for the horses, though! I hope it stays that way for the WEG.

I walked around the farm to take pictures and there is one pretty sight after another.

The indoor is a dream: the sides are out of glass , which makes it so light inside.

Tomorrow we are shipping to Normandy.
I will keep you updated 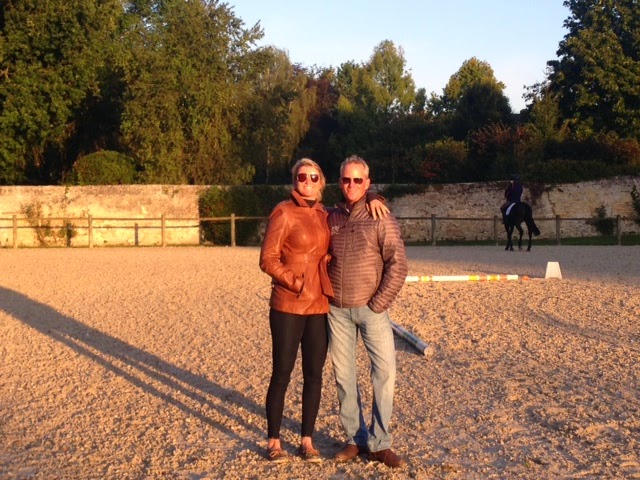 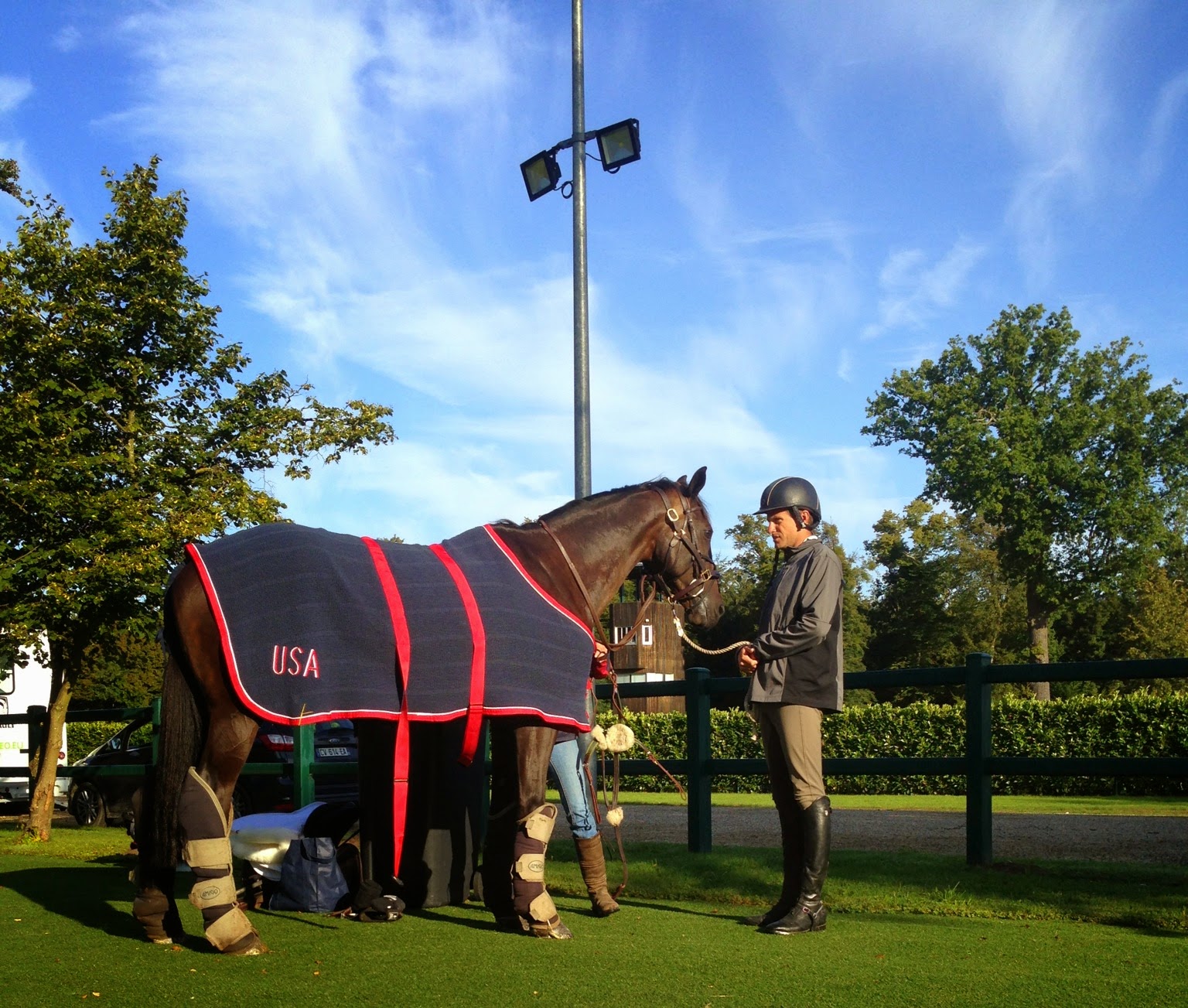 Posted by Amber Heintzberger at 8:50 PM No comments: