Our condolences to Faye Woolfe and her daughter Eliza on the loss of Highland Hogan, who was struck by lightning in his pasture. Faye also owns Ying Yang Yo, who Boyd competed to the four-star level. Eliza was competing Hogan at the lower levels after he had retired from upper-level competition with US Olympian Becky Holder (Becky and Highland Hogan were the U.S. Eventing Team's alternates for the 2000 Olympic Games in Sydney, Australia). This is a tragic loss and we send them all the best.

Note: The above photo is courtesy of Faye Woolfe. Faye included the following note:


It has been so hard but in time the wonderful, incredible memories will replace our tears.
[The photo] was taken a year and half ago at Eliza's very first event that Hogan so gallantly took her through placing first. It was such a memorable day that we will always cherish. I bought Hogan when he was 3 1/2 years old and Eliza was 3 months old! It all came full circle that day with Hogan, Becky, Eliza and I enjoying the moment.
Posted by Amber Heintzberger at 2:59 PM No comments: 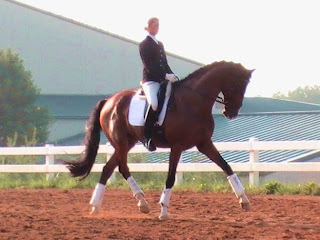 I had a good weekend showing at Dressage at Lexington, at the Virginia Horse Center in Lexington, Virginia riding Jeff, Concorde and Sea Lord in the Prix St. Georges Challenge. It was a huge class with 45 horses.

Jeff did a good test, finishing fourth, and he feels like he is ready for his first CDI in Saugerties, New York.
The PSG Challenge was the first PSG for Concorde and I am very impressed with his performance. He was a little green but he tried his heart out and only made a few little mistakes. He finished fifth. 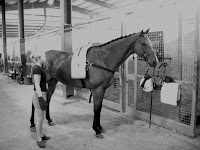 The Challenge was also Sea Lord's (pictured at right with Caitlin Silliman) first PSG. He was a little excited and made lots of little mistakes, which hurt our score; but the good news is that I rode him on Sunday in the Open PSG and he was a star and we won on 69%! I am so exited about that win because I really think he is going to develop into a super star!!!

Concorde also went in the Open PSG on Sunday and he did a great test to finish third on 66%.
I am so proud of these two horses. They did better than I expected for their first time in FEI competition!
Jeff competed in the Intermediaire 1 Challenge on Sunday. I was a little worried about him getting tired in the test, so I pushed him in the warm up a little more. He can get a little lazy on the second day and I was not going to let him die on me in the ring again. I had to ride every step in the ring and I thought that the hard work paid off: it was a very expressive test and I thought we did very well. I was shocked to see that the judge hated it! But dressage is a subjective sport and that is just the way it goes sometimes, and that is okay. I am glad I rode him the way I did because now Jeff knows that he still has to work on the second day in the ring.

I also rode Sheelagh's horse Comet V, (pictured top of page), who was outstanding! He was a star both days and won with great scores in both his tests. I am very excited about riding him in more shows. He is very reliable and has the biggest heart! With Sheelagh keeping him going for me at home and Comet and I getting along the way we do, we have a great time together. Comet has won the last five tests that we did together, and we are looking forward to more success.
I also rode Fernhill Figaro in two second level tests on Saturday and Sunday. He is such a good boy, very easy to have around and always reliable in the ring. He finished fourth on Saturday in a big class and sixth on Sunday. He is ready to move up to third level soon.
I would like to thank Caitlin and Devon very very much for all their great help this weekend - I could have not done all that without them!

-Silva
Posted by Amber Heintzberger at 9:23 PM No comments: