It's Hopping At Red Hills!


It's been quite a busy few days at Red Hills, with Boyd riding 3 horses, as well as filming our next set of training videos.

Boyd chose to film these next 2 training videos at an event, so he could focus on competition topics such as  warming up a nervous horse for dressage and preparing for the cross country phase.  The goal is to give Novice & Training level riders insight into Boyd's strategies for competition success, and we hope that these videos will sell like hotcakes!!

I will say that after filming these segments with Josh Walker for the past 2 days, I am extremely excited to see the results of the footage.  Boyd is a real natural in front of the camera & producing these videos in a live competition setting has been incredibly informative!  Boyd has managed to talk through his competition protocol while laying down some impressive results during the process!

The newest star in the barn is the handsome bay import, Otis Barbotiere, who is poised in 6th place with a score of 39.5 in the Open Prelim B division.  Crackerjack, owned by Colin Davidson's family, was in a respectable 8th place after dressage, but made his move up the 3rd after a clean xc run.  Neville has not disappointed as well, cruising around the XC like a pro, moving up from 6th to 2nd today & putting Boyd in the press tent late in the day for the top rider press conference!

I'd also like to mention how well both Caitlin & Erin have done over the weekend.  Caitlin cranked around the 2* XC with a double clear, moving up from 18th to 9th & a very large field of competitors.  Erin kept her composure yesterday on No Boundaries, keeping him together in the dressage when he was uncharacteristically tense....and then came back today with a clear round XC in the Advanced division with 3 rider falls, no one under the time & a slew of refusals.  Way to go girls!!

I'm posting a group of photos from the past few days which capture some of our video filming sessions, scenes throughout the event & time in the ring and on course.   Keep up to date tomorrow through live scoring & good luck to all......LT
Posted by Lisa Thomas at 6:50 PM No comments:

Dressage Video of Boyd and Otis at Red Hills, Courtesy of Ecogold

Here's a video of Boyd and Otis performing their dressage test at Red Hills yesterday, courtesy of sponsor ECOGOLD:


Also thanks to eventingnation.com for posting a funny photos of Boyd and Caitlin on their blog...click here to check it out.
Posted by Amber Heintzberger at 10:34 AM 1 comment:

Here are some photos of Boyd and Otis working on the flat today at Red Hills,
with a few of Neville's friends looking on...
(Photos courtesy of Samantha Clark) 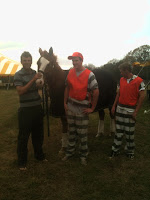 We arrived in Tallahassee, Florida

for Red Hills, the first CIC of the year, today. Neville Bardos is here to compete in his first serious event since the WEG last year and was greeted by a few of the local prisoners who were out for the day, helping set up the stabling. I said g'day to the boys and wished them all the best and they also got to meet Neville, who is incidentally named after an infamous Australian gangster, and give him a carrot.

I've got two other rides in the open prelim: first is Colin Davidson's Crackerjack, and it will be my first complete horse trials on the Otis Barbotiere Syndicate's Otis Barbotiere, just to get him out and about. The plan is to run slowly around cross-country on Otis; if Neville does well in dressage I may let him run a bit. I expect Crackerjack to do exceedingly well in all three phases.

We're just tucking in to a healthy sushi dinner before we get a good night's sleep in preparation for the big event...more to come this weekend! 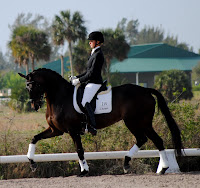 I would again like to extend the invitation to join the Rosa Cha W syndicate. We started the syndicate last year when Rosa was a real baby, and she is growing up fast and is turning into a top class competitor. I know that Rosa will go all the way, and it is so much fun to watch her improve and move up the levels. 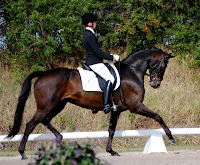 Rosa is already qualified for the Championships for 6-Year-Olds after only two starts. We won the Markel Qualifier at the Spring challenge two weeks ago with 76%. Her plan for the rest of the season is to show in third level and the 6-year-old classes and I am hoping to be very competitive in the 6-year-old championships at DRESSAGE AT DEVON in September and at the USEF National Young Horse Finals in Kentucky at the end of the year.

The way she is developing, I think she will be ready for her first Prix St. Georges by the end of next year. I would love to have you join Rosa and me on our journey up to Grand Prix!

For more information please click here, and call directly to discuss your interest in this amazing horse.
610 806 2721

Silva
Posted by Amber Heintzberger at 3:18 PM No comments: 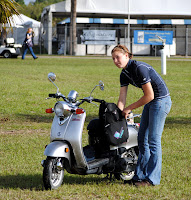 Devon in Wellington
We had a successful final trip to Wellington this weekend. Devon, Kymmy, (Kymberly Pullen) and I drove to Wellington last Monday morning to compete at the Palm Beach Derby. I had Aesthete, Duvent, Rosa Cha W and Austin and Kymmy had her horse Wiedermark. Poor Devon had to leave Rembrandt at home because he got a little splint two days before we left.

Lesson with Michael Barisone
On Wednesday I took Rosa, Aesthete and Duvent for lessons with Michael Barisone. I also did that on our last trip to Florida and Michael has been very helpful; I enjoy working with him very much. Michael also came out to help me warm up at the show and that was great! 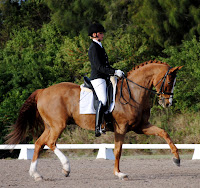 We started showing on Friday. Duvent is getting better and better about dealing with the pressure at the show; he still gets worried, but I am so happy about him getting better every time out. He did very well in his first class, third level test 3: we scored 65% and finished third. On Saturday he came out even more relaxed and we scored almost 68% and finished an equal second to Aesthete. By the time Sunday came along he was tired, which is a good thing for him! He was very rideable and I thought that was our best test yet. We did do a few extra changes, which is fine for now, and we finished 6th . 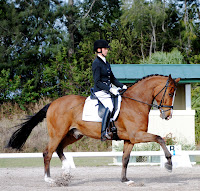 Stately
Aesthete (Stately) was a star this weekend! He was already soooo much better than last time. He really could not have gone better or tried harder for me. We won third level on Friday and Saturday with 71% and 69%. On Sunday we finished second in the Markel Young Horse Qualifier with 77.6%. 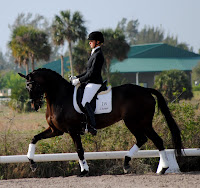 Rosa Cha W is growing up so fast! She still has to get physically stronger but she is mentally becoming a real competitor. She really is a wonderful horse and I know that she will go all the way. She did her first third level test this weekend and finished third on 66%; on Sunday she scored 72% in the six-year-old class and finished fourth!

I also rode Amy Heron's Austin for the first time. Amy and Austin have been with me for a few months now. I am training Austin, who is a 6-year-old Dutch Warmblood, for Amy. I rode him this weekend and Amy is going to start showing him once we get back to PA. Austin was great: he won first level 3 on Friday with 67%. On Sunday he was a little worried about the strong wind and scared of the flapping tent, but he still finished fifth in his first time competing at second level.

My student Kymmy and her horse Markie did very well in third level, scoring 67% and finishing third!

-Silva
Posted by Amber Heintzberger at 7:24 PM No comments: 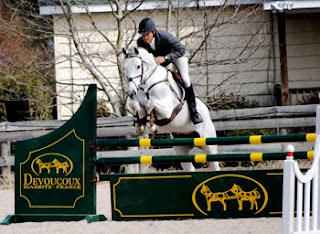 Crackerjack is a purpose bred event horse who was bred, trained and produced by the late Colin Davidson. Colin put years of hard work and passion creating this wonderful young horse who is for the rider looking to go all the way!! He has it all; jump, scope, movement, tempermant and quality.

He is currently cruising around prelim, with intermediate in his sights!! I urge any rider with dreams and aspirations of winning a four star to come try this horse.

While Boyd was down in sunny Florida at the PRO DerbyCross, Lillian, Caitlin and Sara were back in South Carolina competing at the Sporting Days in Aiken horse trials. Their results are as follows:

Lillian Heard riding Only To You, 19th place