Boyd to be Featured on Eventing Radio Show

Everyone is encouraged to listen in as Boyd takes part in the exciting new Eventing Radio Show on The Horse Radio Network. Until April 26 the weekly show, (also available as a podcast), will feature coverage focusing on the Rolex Kentucky three-day event.

According to a press release, "This one-hour weekly show covers all the current news and information about the sport of eventing. With less than three months before the Rolex Event at the Kentucky Horse Park the show will focus on Rolex by interviewing show organizers and the some of riders that are expected to attend. Episode 2 is now available and includes an interview with Janie Atkinson, Executive Director for the Rolex Event. Janie speaks about all the changes and construction going on at the Kentucky Horse Park as a result of the preparations for the Alltech FEI 2010 World Equestrian Games and how they will impact the Rolex Event."

The show is hosted by Glenn the Geek and Chris Stafford, both located in Lexington, KY. Chris is a former event rider who has been an equestrian journalist and broadcaster for over 30 years and has covered all the major events. Glenn is an experienced radio host and actor who has been involved with the horse industry for over 20 years with an emphasis on eventing.

Listeners can catch new shows each Thursday at www.eventingradio.com or by subscribing through iTunes or Zune. It also has its own group on Facebook.com. The show is available to download to MP3 players or iPods, so folks can listen while they are doing their favorite barn chores or on the road to the next horse show!

Boyd's interview will take place on Monday, January 26th and will be featured on the show on Thursday, January 29th. Be sure to tune in, it's guaranteed to be entertaining!
Posted by Amber Heintzberger at 12:39 PM No comments:

Final foal for the season.... 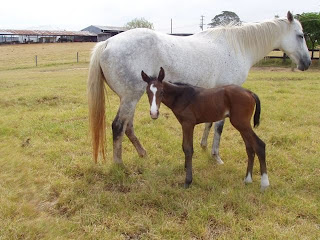 This morning in Australia, the final foal was born for the 2008/2009 season. "Warney", (named after Australian cricket legend Shane Warne) is possible the ugliest foal bred by Windurra Australia! Looks aside, this eventing foal is bred in the purple. His dam, the gray mare in the picture, is Brilliant Silver, whom is by Brilliant Invader, who is the sire of World and Olympic champion Reddy Teddy. The sire of Warney is Staccatto, who was the 2005 FEI #1 eventing stallion in the world. He is half Dutch Warmblood, (Salute), and half Australian Thoroughbred. Stacatto himself was a 4-star event horse.

Little Warney may have long ears, but he has the personality of a champion, just like Shane Warne.

Boyd
Posted by Amber Heintzberger at 9:28 AM No comments: 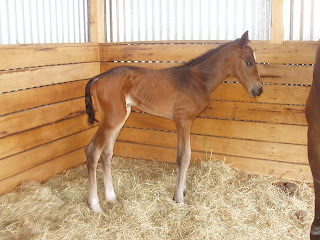 Little Carrie was born yesterday in Australia! She is out of our mare Rosa Cha W, by the German stallion His Highness. Rosa Cha W is by Regademoi, who is by Rubinstein out of a Consul mare.

Rosa has just turned four and is going to come to the U.S. after she finishes taking care of Carrie!

Boyd Heads South for the Winter 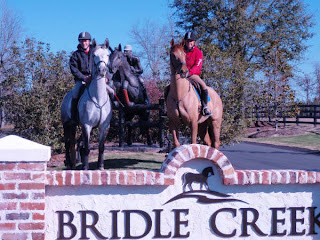 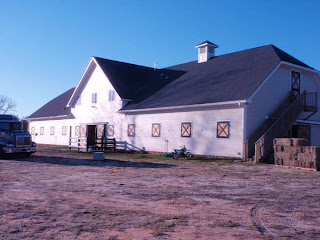 On Friday I arrived down at Phillip and Evie's winter farm in Aiken, South Carolina. Red Oak Farm measures about 30 acres in the Bridle Creek Equestrian development. The barn is top class with 17 stalls, wash stalls, tack room and a beautiful apartment above. 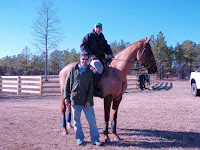 The team vet, Dr. Kevin Keane, has purchased 10 acres next door. He has 5 turnout paddocks that some of our horses are using. 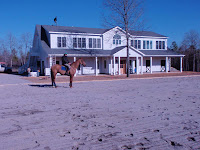 Next door to him is my friend Illeene Borram, who has built a magnificent barn with apartment and an outdoor dressage ring. 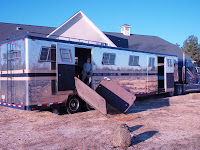 The group of horses that I am focused on traveled very well; some too well! Neville Bardos was very full of himself today. I did some dressage and three lots of canters at a mile each. He is getting fit for Rolex, and is really enjoying his work. 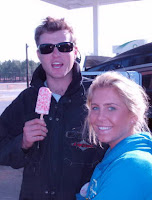 A good friend from Australia, Lauren Balcomb, has come over to train for a month. Lauren is one of Australia's best younger riders. It is great working with Lauren, Woodzy and Jennie. They are all great riders. 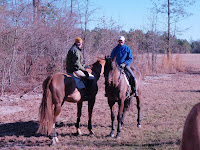 Boyd
Posted by Amber Heintzberger at 11:43 PM No comments: