A Word From Our Sponsor: Choice of Champions

A word from our sponsor:

Phoebe Ingram of Choice of Champions International writes, “Choice of Champions is now sponsoring Boyd because he is a very successful event rider with a bright future and likes using our products but there was a lot more than that that went into the decision to sponsor him.

“I met Boyd in Aiken this winter. I spent time watching him doing some coaching with a young friend of mine and also training a young horse. I liked not only his style, with his easy, Australian, laid-back attitude but his obvious knowledge of how to teach both person and horse. How do get the best out of the person by pushing them to have more confidence in their own abilities, and how to get the best out of the horse by not giving in to any antics, which could be a funny process to watch, and equally giving it confidence in its own abilities. Boyd also came out to the farm I was staying on and taught people and horses from beginner novice up and they all really enjoyed his approach.

“Boyd is fun to spend time with. We had one memorable evening where he joined a group of us “oldies” for dinner and we all laughed and drank and ate a great deal and I think he probably went away rather bemused. It shows he relates to all types of people and is a great ambassador for his chosen sport and we are very happy to be sponsoring him.”
Posted by Amber Heintzberger at 5:38 PM No comments: 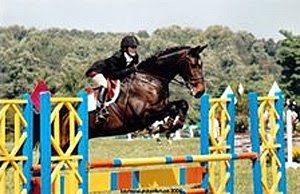 It was a sad day at the farm yesterday for me to see Macintosh head off to his new home in Connecticut. The 12-year-old Irish Sport Horse gelding was sold to an up-and-coming jumping rider. Even though I have only had him for a month or two, he has been a pleasure to have in the barn and I hope all goes well for him. His ex-owner, Ashley Johnston, from Ohio, was extremely happy to have her horse sold as she has just found out that she is pregnant.

-Boyd
Posted by Amber Heintzberger at 10:25 AM No comments: 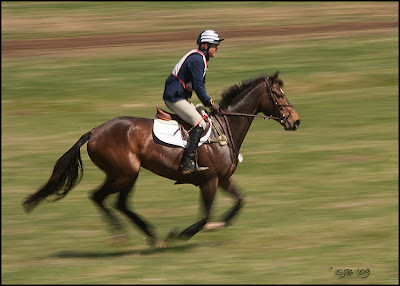 Photo of 'Forotten Emblem', owned by Nina Gardner, compliments of Dr. Steve Burkowitz
I was back home in Pennsylvania on the weekend competing at the local Plantation Field Horse Trials where I rode five horses in total in the training and prelim divisions.
It was my first ride of the year on Melissa Studenberg's mare 'Aberjoy'. She was great, finishing 4th in the prelim. I hope to compete her in a couple of months at the Bromont Three-Day Event in Quebec, Canada. The rest of the weekend was spent riding some of the up and coming training horses, that all ran well.
Next weekend is a big one for me, with four horses entered in the advanced at Fair Hill: 'Remington' and 'Benwald', and then two new rides called 'Rock on Rose' and 'In The Beat', both owned by none other than Bruce Davidson. I am also riding a bunch of other horses in the intermediate, prelim and novice.

Until then, all the best!
-Boyd
Posted by Amber Heintzberger at 1:48 PM No comments: