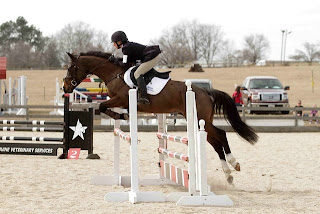 Jewels is a coming 6 year old 15.2h TB mare who is currently located in Aiken, SC where she has been in training at Boyd Martin's facility for the winter. Jewels is blessed with nice gaits and a scopey jump. She is super quiet and easy on the flat and extremely careful and straight forward over fences.

Finishing on her dressage score at Novice this season Jewels shows extreme potential for the future. She is great to handle on the ground and sweet as can be. Jewels is a must see if you are looking for an eventing prospect ready to move up the levels.

Photographer Laurie Fix sent us a link to her online gallery of photos from last week's US Eventing Team training session at Ilene Boorman's Bridle Creek Farm in Aiken.

Please follow this link to see the photos. You can contact Laurie at Laurieannfix@gmail.com if you are interested in purchasing prints.
Posted by Amber Heintzberger at 8:02 PM No comments:

We had a good last day at Lowcountry Dressage:
Silva
Posted by Amber Heintzberger at 8:57 PM 1 comment:

We had great results at the first day of the Lowcountry Dressage show on Johns Island, SC. I rode Rosa , Duvent, and Rembrandt yesterday. Duvent did a nice test in fourth level test 2 and we finished second with 66.4%. Rembrandt did his best test so far!! We did 3rd level test 3 and he was fabulous and we won with 70.7%! Rosa Cha moved up to fourth level and was wonderful as usual and she kept her record clean. We won with 70%. So far Rosa has won every class she has showed in in 2012!

Today I am showing Duvent in fourth level again and Rembrandt in his very first fourth level!

-Silva
Posted by Amber Heintzberger at 6:48 AM No comments:

Hidden Promise Sold!
Congratulations to Cynthia Pordon on her new and
wonderful horse Promise!
We wish her all the best and we are thrilled that
Promise will have such a great new home!
Posted by Amber Heintzberger at 6:38 AM No comments: