Posted by Amber Heintzberger at 9:30 PM No comments:

Dressage at the American Eventing Championships 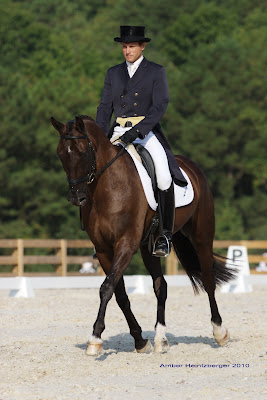 It was a successful day for Remington, Neville and Charla in dressage at the AEC. Ron and Densey Juvonen's Remington XXV went early and did a good test; unfortunately fumbled the last flying change and halt but we still had a record score for him of 43 which left him tied for seventh place. 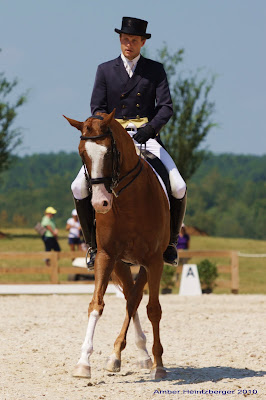 Nev went in and did a real workmanlike test and I was really pleased with him. He also had a personal best in the four-star test of 48.5 which I was very pleased with. 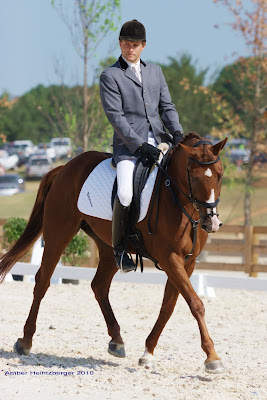 Ron and Densey's mare Charla got a little bit nervous and broke in the counter canter but wasn’t far off the pace with 31.1, in eighth place. 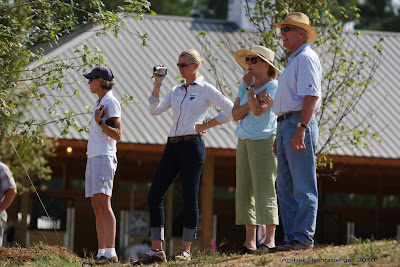 Tomorrow is cross-country for Charla and the two advanced horses have a gallop first thing in the morning, after which the US team vets will check them out. Times and results are located at the USEA Website.

Bid on Lessons with Boyd and Silva!

The Area II Training Training Three-Day Auction begins today! Be sure to visit the site and bid on lessons with Boyd and Silva!

Posted by Amber Heintzberger at 7:11 PM No comments:

Georgia or Bust..and a Brush with The Law 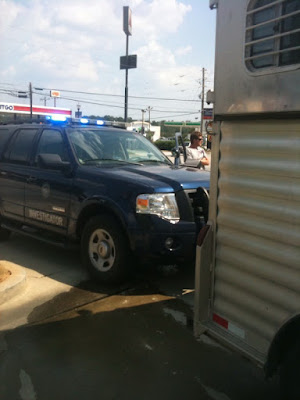 Yesterday we had our fourteen-hour drive from PA down to Atlanta, GA with Remington, Neville, Charla and Summer for this weekend’s AEC. My heart stopped when halfway through Georgia I saw blue flashing lights in my rear view mirror but luckily it was not the highway patrol, it was animal health inspectors. I’m glad to say all my horses’ health certificates, Coggins tests and vaccinations were up to date so I managed to continue my trip unscathed.

Chattahoochee Hills is an amazing venue. It’s my first time here and it looks like a nice place to spend the next couple of weeks, hopefully, in preparation for the WEG. All the horses shipped well and look to be in good condition to compete in this weekend’s event.

Summer competes on Thursday in the novice and the other three go on Friday.

-Boyd
Posted by Amber Heintzberger at 9:04 AM No comments:

Our home bred mare Fair Fiona W was sold last week to Janet Rubino from Malvern, PA, who is an amateur who trains with Rebecca Cord. I’m very excited that Fiona has gone to such a good home and will have such good training. We knew that they got on straight away: Janet’s a very nice, soft rider, which Fiona likes, and they look beautiful together. Since they’re in the area I will see them around and I’m looking forward to seeing them out at their first show. We had Fiona all her life and had two colts out of her, so it was kind of hard to let her go, but we’re happy that she’s going to a nice home with good people.
Posted by Amber Heintzberger at 9:48 AM No comments:

Silva and Caitlin spent Labor day weekend at a dressage show at the New Jersey Horse Park with four horses: 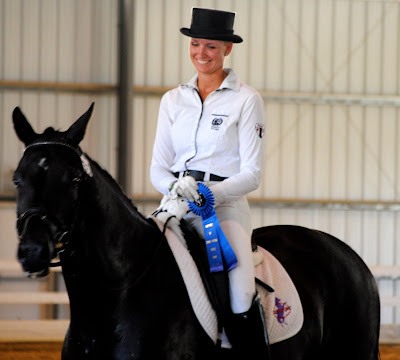 Larry and Melinda Waltons’ young mare, Constantina RRS, is only four years old and this was her first show. She was so good, she just walked on the trailer with everyone else, and at the show I got on her straightaway and she went in the big arena and was great. She won her first class with 74% and then straight afterwards she did the Materiale class four four-year-old mares and was second with a 76% to Chris Hickey. That was pretty impressive for such a baby – she had the best time, she loved to go to the show!

“Cece” came to me about six weeks ago and hadn’t even been out of the round pen yet, so she was still very green. Melinda and Larry did a really good job; it’s unbelievable how they handle all their young horses. The horses are so worldly and never have had anything bad happen to them. Melinda spends a lot of time with them so they are very good, they’ve been handled so much and so well and that makes a big difference. 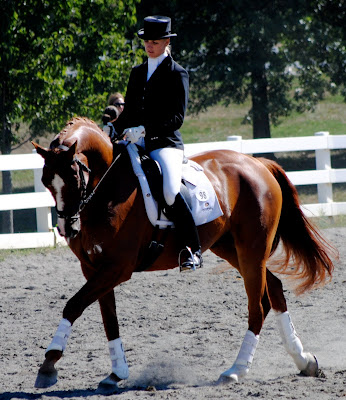 He is now qualified for the BLM and GAIG finals, which is exciting – we still have a month to prepare and I think we have a good chance at the finals. I’m glad I took him in all these classes this weekend to get him qualified. I’ve got him entered in the second level championships there and then in 3rd level the next day – he’s ready for it. 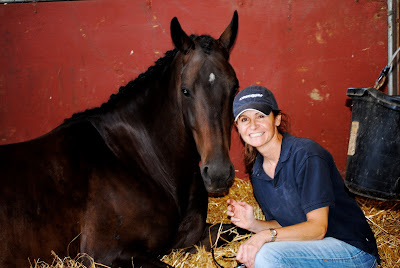 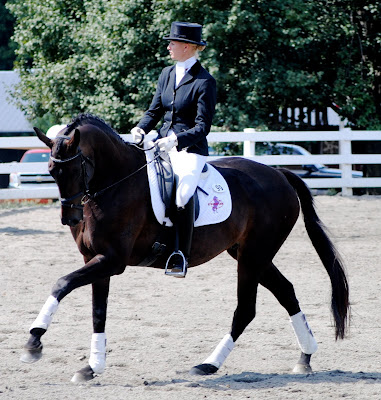 Rosa Cha W took a little time off the first day – it was my fault! She’s been doing so well every time out and it was a hot windy day and I didn’t really feel like competing, which is bad when you’re at a competition! I was also wearing some spiky spurs from another horse and I should have switched with Caitlin, who was also at the warm-up. Rosa warmed up a little wild and I thought she’d be fine, but then they said it’s time to go in. I thought, “Oh shit…” as she was snorting and still a bit wild. We went in and she was up like a champion but when I asked her to canter I just touched her with a spur and she squealed and bucked and had the best time! She’s a very electric horse, which is going to be awesome when she gets to Grand Prix, but this was a reminder that I still have to ride her! I’m glad that happened because it’s a reminder when I get to the BLM final that I have to ride her more the first day. She still got 65%, which is low for her but not bad. She was still a little up the next day but was much better: still a little tense, but she scored 69% in training level. She will go to the finals and I will definitely be ready for her there! 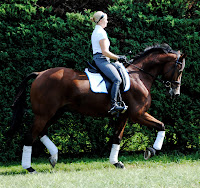 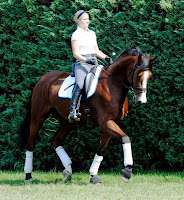 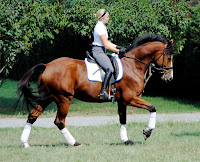 This weekend Caitlin rode Zanadoo, a sales horse owned by Sara Hughes, at his first dressage show. I had Caitlin ride him because I wanted to see how he’d do with a little bit less experienced rider than me and he was great: he trailered well and didn’t spook at anything. He did 1st level and was 2nd the first day with 66%, then placed 3rd on the second day with 65%, again at first level. I don’t think it will take long to sell him: he’s an Oldenburg gelding, only six years old, and he looks beautiful and was so easy to ride.

-Silva
Posted by Amber Heintzberger at 9:27 AM No comments: