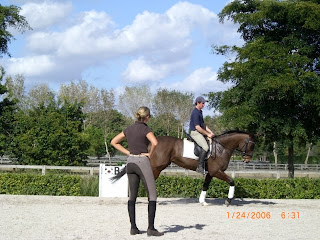 Eventer Nate Chambers is here in Wellington for a few weeks to improve his dressage and show jumping skills before he heads to Aiken, South Carolina to start his eventing season. Nate has two of his horses here and is having a lesson with me every day. Both his horses and his riding have improved so much already.

-Silva
Posted by Amber Heintzberger at 3:13 PM No comments:

Greetings from Wellington! We went to our first show last weekend, the Wellington Classic 1. 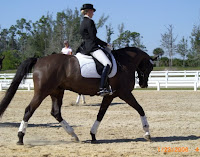 I rode Simply Priceless, an Australian Thoroughbred owned by Simone Kahn. We call him Johnny and he is an Intermediaire horse that Simone sent to Wellington with me to improve his flat work. Johnny went so well for me. On Friday he won the First level with 67 percent, and on Saturday he went in a much bigger, more competitive field and scored 70 percent and finished 4th. I was very proud of the little AUSSIE TB!!!!!!

I also rode DP Lidcombe on Friday, in the First level Test 3. Lidcombe has improved so much since his last show: he was much more together and did not feel so huge anymore! I think he is growing up! He finished second with 67 percent. 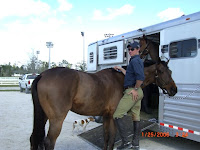 On Sunday I rode Sea Lord and Jeff the Chef. Sea Lord competed in his last Third level test; I thought it would benefit him to start one more time in Third level before we move up to Fourth level at the Gold Coast Opener Festival, and wow what a great test he did. As I was riding the test, I thought to myself, "He is not far off FEI." He did not make one mistake!

The best thing about this amazing-moving horse is that he really, really loves competing. He was trying his heart out for me. He scored 9s for both his extended trots and a lot of 8's for other movements. Every time I show this horse I get so excited because I can feel what a great Grand Prix horse he is going to be! I CAN NOT WAIT!! He won the class with 72 percent! 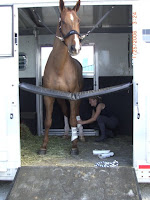 I rode Jeff in his last Fourth level before we move up to Prix St. George at the Opener Festival. Jeff went great and he feels ready for the next level. What I am the most exited about is that he is not spooking any more. He finally understands competition and he enjoys it. He was easy to ride and only made a few little mistakes, which were my fault. He scored 69 percent and finished second.

Caitlin rode her first Third level test on Waimea. Margo was so nice to give Caitlin the wonderful opportunity to show Mea in Wellington. Caitlin rode very well but she still needs get to know Mea better: they had a few mistakes in the canter, but it will be better next time and they still finished third.

I was also very excited that Boyd was there to watch us go! 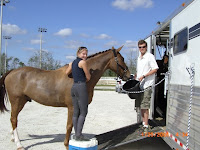