Silva, Ashlea and Kyymy Off to a Good Start at CDI in New Jersey 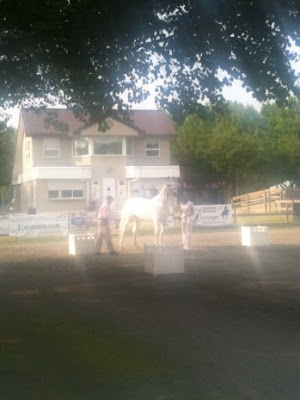 Ashlea and Mintie at the Jog
This CDI Y is Ashlea's first qualifier for the Young Rider World Cup in Frankfurt, Germany. After Mintie and Ashlea passed the jog on Thursday, they had a really good test on Friday. They did the Young Rider Team Test, which is the same test as the PSG. Ashlea rode beautifully and Mintie was trying very hard to stay focused. 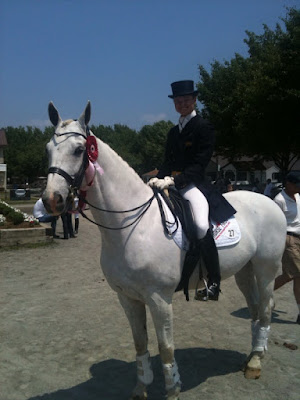 Ashlea and Mintie
The two international judges had her placed first and the American judge gave the American girl 5% more then the other judges, which placed her in front of Ashlea by 0.3%. That was unfortunate, but I am very proud of Ash and Mintie for placing second in an international competition.

Ashlea has another test today and the freestyle tomorrow morning.Even tho I really hope she is going to win I am a little worried! Ashlea said that if she wins the CDI Y, she is going to sing the Australian anthem "loud and proud", and I am not sure if I want to be part of that considering Ashlea is a terrible singer!!!

Kymmy and Markie had a solid test yesterday. This is only the third or fourth time that they have competed at Fourth level and each time they do better and better. They scored 63% and finished fourth - good job! Especially because there are a lot of good horses and riders at this show.

I cannot begin to express how lucky I am to be able to ride the horses that I have at the moment. It is so much fun to ride horses with this quality! I have always loved all the horses that I showed, but I have never had such fantastic horses as I do now.

Rosa Cha W, who is still such a baby, tried her heart out for me and we won third level test 2 with 74%. She has come such a long way since we did training level last year and now she is not only winning at third but winning with unbelievable scores.

Aesthete, or "Stately", of course was awesome. He is probably the best horse I ever sat on. We did our second competition at Fourth level and won with 73%. I cannot wait to ride him in Grand Prix! But I will take my time to make him the best he can be - he is still only 6 years old.

Duvent got a little excited this time but we still finished second in Fourth level test 2.

Today we have Rosa in Third 3, Stately in Fourth 2 , Duvent in Fourth
3, Markie in Fourth 2 and Mintie in the CDI again.

Silva
Posted by Amber Heintzberger at 8:33 AM No comments:

Horse Junkies United, presented by our sponsor Ecogold, have posted their latest review from our training video series. Click the link to check it out! -Boyd and Silva
Posted by Amber Heintzberger at 11:22 AM No comments:

While I was on course at Rolex, I sat by some women who were taking pictures at the Head of the Lake.  Since I had to hoof it across the course to another set of fences, I handed my business card to one of the ladies & asked if she would be kind enough to get some pictures at the water complex.  Needless to say, I didn't know what a talented photographer & had recruited.


Interestingly enough, Cindy revealed (after some prodding) that she had an interesting past at Rolex.  I asked her for a little bio and discovered that her love for horses had actually brought her to Rolex for the 1983 pony club rally nationals, where she won the jumper division. She also groomed for Lisa Anderson in 1985 who rode in the Intermediate  Prelim divisions (winning one), and in turn Cindy received the top groom's award for her efforts!


Cindy is from McHenry Illinois and works in Mobile Alabama as a Catastrophe Adjuster.  She is also a Certified Advanced Therapeutic Riding Instructor and enjoys photography as a past time, and I think she shows some serious talent!!  Thanks again to Cindy for these fabulous photos.
iPhoto Gallery Link

Posted by Lisa Thomas at 9:06 PM No comments:

Boyd Martin
at
CS&W Farm
July 12 and 13, 2011
October 18 and 19, 2011
Clinic with the 2010 Horseman of the Year
Boyd is a 4 star eventing competitor that finished 7th overall on the USEA Rider of the year leader board in 2007. He was shortlisted for the Australian Olympic team on two horses, Yin Yang Yo and Neville Bardos. Since becoming a US citizen, Boyd has had great success competitively. He was named Rider of the year by the Chronicle of the Horse and in 2011  is ranked number one on the Nutrena leader board. For more information go to  www.boydandsilvamartin.com.
Boyd Martin is one of the best clinician I have ridden with in a long time. People who ride with him feel they and their horses were challenged mentally and physically without being overfaced. Your confidence reaches a new level. He demonstrates imagination in the exercises he teaches. He explains techniques for both stadium and cross country clearly and logically. Both my horses excelled during the class and I have used many suggestions afterwards. This is someone you don’t want to miss riding with.
Fees:
Semi privates - $225.00 per day
Groups of 4 - $165.00 per day
Tuesday - Flatwork/Gymnastics
Wednesday  -  Cross Country
Our XC includes Water/Ditches/Banks for levels BN-Prelim
2011 new sunken road complex and additional new jumps
Registration must be received with payments in full prior to clinic to reserve your spot.  Any questions call Claudia Winter @ 518-537-4417 or email cswfarms@valstar.net
Visit us on the web at cswfarms.net
Download Registration Form from Our Clinic Page!!
Posted by Lisa Thomas at 12:53 PM No comments: 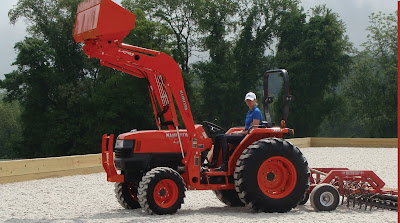 Boyd has a few things to say about the new arena that Attwood Equestrian Surfaces has just completed at his and Silva's new facilities in Cochranville, PA:

Silva’s dressage operation has completely moved to our new farm in Cochranville, PA, a beautiful piece of property with 18 stalls and plenty of turn out. Her entourage of dressage horses have had a huge improvement to their training facility with a new arena by Attwood Equestrian Surfaces.

We are both very excited to be riding on what we think is actually the best footing out there for dressage and event horses. Attwood Equestrian Services have just completed a 60 x 20 meter dressage court using their fantastic new synthetic surface: a polymer coated sand which doesn’t require any watering and it’s an amazing surface that almost has a memory for when the horse’s foot presses down on the surface that it bounces back up completely, eliminating any concussion sustained through the vigorous training of our top level horses.

One of the scariest and most important parts of the footing is the grooming needed every couple of days – both Silva and I have given the fence around the arena a couple of good bumps with the tractor!

If anyone is interested in checking out this footing please don’t hesitate to stop by and have a look at our place in Cochranville or ring Edwin Barron at Attwood Equestrian: 714-258-6859

Since 1992 Attwood Equestrian Surfaces has been at the forefront of footing development. We are the original manufacturer of polymer- coated, dust-free footing in the USA. Our footings are engineered from meticulously selected sand, blended with micro poly fibers and coated with a visco-elastic polymer.
Attwood Equestrian Surfaces has been manufacturing and installing polymer-coated riding surfaces for more than twenty years. Using the latest in technological advances and continuous innovations, we remain at the forefront of footing development. Our products are Pinnacle, Ameritrack and GGT.
Posted by Amber Heintzberger at 10:20 PM No comments:


The CCTChallenge begins its’ 2011 Combined Test Challenge series at
Humphrey’s Point Farm; Rock Hall, MD and announces its’ FREE Rider’s Incentive Program with
the 1st of 2 raffles of the season for 4 clinic positions for
the upcoming "Boyd Martin /Father’s Day Clinic / Cookout at the Shore"!

and details of the Incentive Program ).
The Challenge is only accepting 24 riders for each Combined Test Challenge!
Clinic Registration & Prizelist Email    CCTChallenge@gmail.com 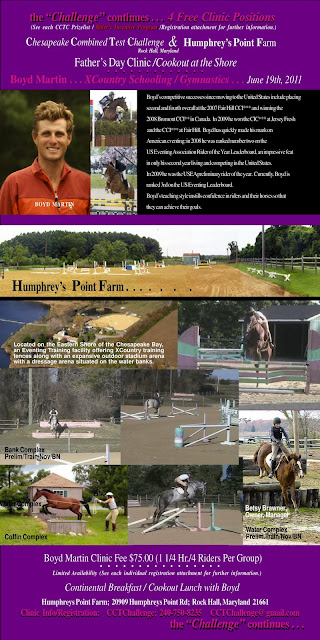 Posted by Lisa Thomas at 9:22 AM No comments: 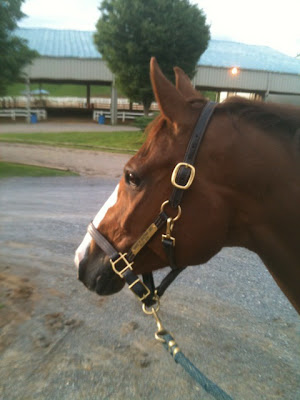 This weekend saw a great competition over three days at The Virginia Horse Center in Lexington, VA. Without a doubt, this is one of the coolest venues around for horse trials, with a massive indoor stadium for the show jumping. I competed there with five younger horses that all did well:

Charla, (pictured above), owned by Ron & Densey Juvonen, is getting back to her top form after placing 6th in the Open Intermediate. She is heading up to the Bromont CCI** in Quebec in a couple of weeks, and this run was perfect for her. This feisty little mare has all of the talent in the world and I feel she has a chance of going to the Pan American Games if all goes well.

Cagney Herself, owned by Bonnie Stedt, had her first Preliminary start and did not disappoint. She had the only clear show jumping round in the Preliminary Horse division, finishing her weekend in 4th place. Next up for Caggaz is a prelim in two weeks at Waradaca, then a well deserved spell of rest.

Crackerjack, owned by Colin Davidson and Lucy Boynton, also showed moments of brilliance in the Prelim. If I can keep Crackers relaxed, he is a big time horse. This little guy can move in the dressage, and he can seriously run and jump! We were unlucky to pick up my only rail this weekend; he finished 6th. Next stop for Crackers is the CCI* up in Bromont.

Summer Breeze W, owned by Anne Hennessey, has to be the most consistent horse I have ridden this year. She is still a little green and spooky, but she is showing signs of being a rock star for the future. She picked up 3rd place in the Training division at Virginia and next up for her is the Training division at Bromont, then a well deserved break at Anne's place in Vermont. 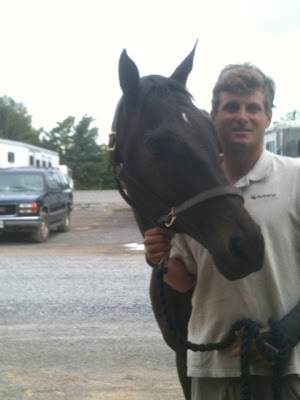 Partyboy, (pictured above), owned by Fernanda Kellogg & Nick Meyers, also had a successful weekend. The dressage judge was a bit harsh on Curtis, but a clear round in the show jumping saw him move up eight places. He finished 8th overall. I have decided to leave him at Training level for a few more starts as he still feels green, but he is an exciting young horse that has got a great look about him.

The other awesome part of the weekend was seeing my working student/assistant rider Lillian Heard smash a quality field in the Prelim on her mare Ariel. She had a dressage score of 18 and looks to be in good form for Bromont. I am a little bit nervous that she might have me covered in the CCI*, so I am thinking of telling her that the organizers have changed the dressage tests at Bromont, just to put her off her game.