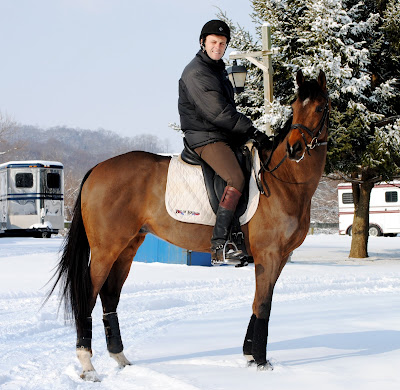 Last Monach enjoying the snow in PA
I am very honored to say that I have Last Monach, also known as "Super Stew," in work thanks to the pregnancy of Holly Hudspeth. Unfortunately Stew will be only with me for the next few months until Holly pops out her first bambino....congratulations to her and Chuck! 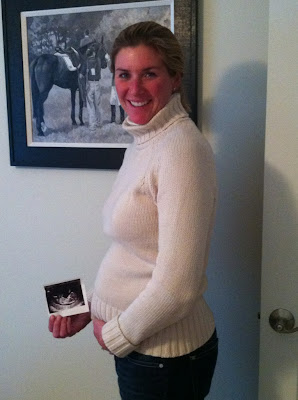 Stewy is a top class 4-star event horse that Holly bought off the race track out in Seattle many years ago. Holly has produced him from racehorse up to advanced event horse in only a few years. He is currently one of the best horses in the country. Last year he was on the short list for the US on the WEG squad.

I have had him in training for the last month, and I have been working on basically getting to know him. He is a super talented jumper that seriously cracks his back when he is in the air! My main focus has been the dressage, with figuring out which buttons to press to ask for the changes and the half passes. He is a very fit horse currently, cantering five miles twice a week and doing it without even raising a sweat!

I would like to thank Chuck for "knocking up" the bride, and giving me this great opportunity to ride this champion....

My first outing will be on him next month in the Intermediate at Pine Top down in Georgia.

Boyd
Posted by Amber Heintzberger at 9:04 AM