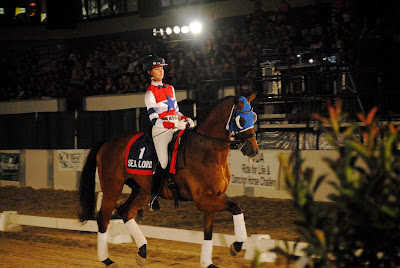 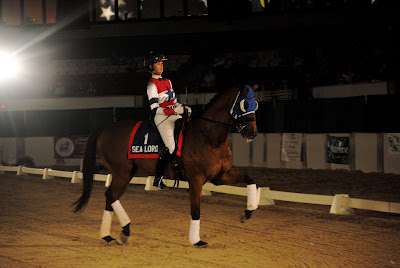 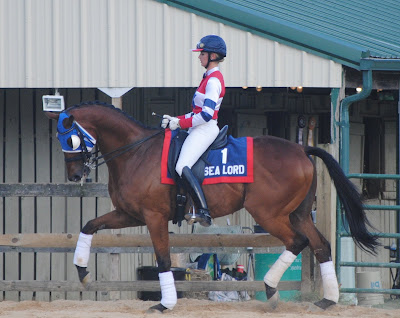 We had a great weekend at the Ride For Life show at the Prince George Equestrian Center in Upper Marlboro, MD. Stately, of course, was his normal awesome self! We won both Fourth level tests and got High Score, Fourth level at the show.

Duvent placed second and third in both Prix St. Georges. I was so happy with him going into the big, scary arena; a few months ago there would have been no way that I would have even been able to get him into that arena. He was very good in all the trot work and in the walk - the canter started well but he got got a little excited towards the end. We are getting closer and closer to being great.

Kymmy and Markie did very well: they won Fourth level, test 1 on Saturday with 66% and finished fourth in Fourth, 3 on Sunday.

Devon and Ballatale had a great test on Saturday, finishing second in Third level with 66% and placing fifth on Sunday.

We had to think about a theme and organize a costume and a freestyle. Charish Campell,(Big Bird's owner) and I thought of going as a jockey since BB is an off the track Thoroughbred and is now at the Grand Prix level, which is very unusual.
We got a freestyle together with the soundtrack from the Secretariat movie and my friend Cheryl Griffith made me a fabulous outfit.

Big Bird loved the packed arena and the people loved us! It was soooo much fun and it felt good to be able to help raise money for breast cancer and help people who need help, especially now since we have experienced so much generosity and help from everybody in the last few weeks.

Here is the video :

-Silva
Posted by Amber Heintzberger at 9:39 AM