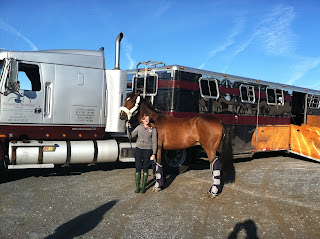 Sara here on a wonderful adventure to Germany to groom for Boyd at Luhmuehlen with Ying Yang Yo. My adventure started with a three hour trailer ride to JFK airport where we had to wait in quarantine for six hours. Luckily Thomas and I had great traveling companions: Ronald Zabala-Goetschel with Master Rose and David Watson with Nina Ligon’s Fernhill Fearless. Since it was my first time flying with a horse it was wonderful to have some guidance from such veterans. 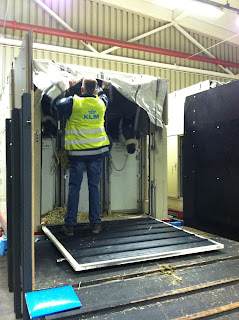 Once the three boys were loaded up on the truck they were brought to the "cargo" area to get ready to be loaded up onto the plane. Due to security reasons we were not allowed to be with them during this part of their journey.

Most of the people on the plane had no idea our horses were even traveling with us, even though this flight was half passengers and half cargo.  I never knew cargo could be alive! We were lucky to be able to watch the workers load the horses into the tail of the aircraft. If you didn’t know there were horses in those containers you would never have been able to guess it. It wasn't until most of the passengers were loaded that we were able go in the back to check on the horses; all of them traveled extremely well. Each time we were able to check on them they were sleeping to the calming hum of the engines. 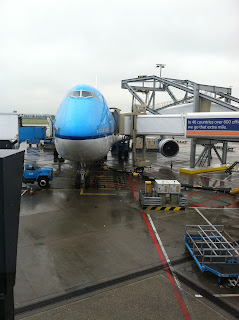 We finally arrived in Amsterdam the next morning.  As passengers, we had to go through the airport Customs before we could attempt to meet up with the horses. Unfortunately they ended up a little ways from the airplane which meant that we had to navigate the city of Amsterdam. Well, if you know me. then you know that was a recipe for disaster! I have a hard enough time navigating around my home town where all of the signs are in English!

After taking two wrong buses we finally got some help back at the airport and just decided to walk to our destination. Upon arriving, the staff at the quarantine was amazing. Everything was straightforward and very easy. We waited there for about three hours until Thomas and I were able to get all of our paperwork and the “okay” from the vets. This is when we had to say goodbye to our American traveling partners whom I was so grateful for!

This started Thomas' and my trek to Germany. Originally I was told that the trip would take five hours. Traffic was much worse than expected and with all of the mandatory stops along the way it took almost twice that! Luckily my driver was an event rider/fox hunter from England which made the trip fun as we talked and debated about sport and country as he tried to convince me of the superiority of England, from their language to the level of competition. Needless to say it was entertaining.

We arrived at Elmar Lesch's farm at approximately four in the morning. This was when I again had to part ways with my driving friend that I luckily made on my journey. 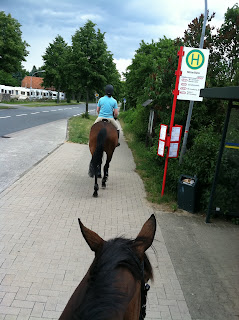 Posted by Amber Heintzberger at 8:52 PM