Great Finish at the BLM Championships on Sunday! 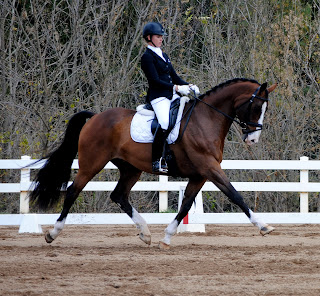 I have to say, we are on a roll! We had a great day on Sunday at the CBLM Championships in Lexington, VA and I could not be happier with how my horses and my students finished!
Rosa was first on at 8am, Sunday morning. She was much more relaxed than on Saturday. - she is always better on the second day. After winning the warm-up class on Saturday she went on to win the fourth level championship on Sunday. She really was amazing and I am so proud of her.
Duvent was in the fourth level championship as well. He did a great test and I am so happy with him staying focused even though the championship classes were in the big coliseum . He kept it together and finished just behind Rosa as reserve champion!
I rode Zoran and Likely Story in the first level championship in the afternoon. That was a huge class of over 40 riders. Story was awesome: she tried so hard for me and scored 70%, which had her finish eighth in the class.
Zoran went at the very end of the class and he just smoked it! He did an awesome test and we won with 74.8% . He is a very powerful horse and he showed everything he had!
Kymmy and Markie showed in the fourth level A Championships and did a great test to become reserve Champion with 66%.

Gracia and Dia showed in the Junior first level championship and had a great result, finishing
fourth.
Amy and Cece had such a great weekend: they won for the very first time on Friday and finished third on Saturday in a very big class. On Sunday they showed in the training level championships in the indoor. Amy was very nervous because she is very competitive and wanted so badly to do well.
They had a great warm up, but then unfortunately Cece was a little spooky in the indoor, which Amy did not expect. They had a few mistakes and did not place this time. Cece is only six years old and Amy has come such a long way with her riding. They are going to be great next year!! I am very proud of both of them!
-Silva

Posted by Amber Heintzberger at 2:10 PM