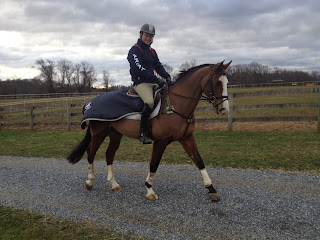 The USEF announced their brand new winter training lists yesterday, which has caused a great amount of excitement, mainly due to the fact that there is not much else going on in the eventing world in mid-December. I'm thrilled and honored to say that the selectors have recognized four of my horses to be worthy of these lists. I have three up and coming young advanced horses in Trading Aces, Crackerjack and Master Frisky who have all debuted on the lists for the first time, in addition to my old war horse Neville. I was also glad to see that my assistant rider, Caitlin Silliman, has been placed on the Developing Rider list with her horse Catch a Star.

Obviously there are a couple of big names absent from the list including my Olympic horse, Otis Barbotiere. I think it was a fair call by the USEF leaving Otis off these lists as he is still in the final stages of his rehabilitation from the Games. He is trotting up sound and is currently hacking for 40 minutes twice a day on the roads. He may or may not be back in time for Kentucky this year, but there are also Luhmuhlen and Pau on the 2013 calendar, both of which would suit him perfectly. I'm in no hurry to accelerate his comeback to have him ready for winter training sessions, as I want to make sure he is 110% healthy before putting him back into intense work.

I believe the lists of the horses and riders is a strong group for the future. There are a lot of new names of riders and horses that will be very relevant coming into the Normandy 2014 WEG. At the end of the day, lists are just lists. I remember being disappointed when Remington wasn't on any list at the beginning of this year, and he ended up being a reserve horse in waiting at Greewich Park on trot up day.