First Show of 2013 in Florida: Welcome Back to White Fences I 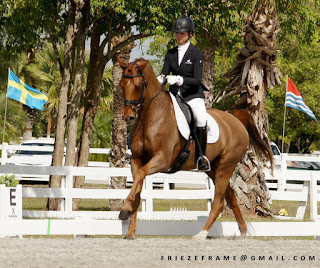 We had a great first show in Florida! It was a busy weekend with 11 of our horses showing.
First I have to say what a great show the White Fences show was. It was very well organized and a beautiful venue. Adam, the organizer and owner of the place, went all out and could not have done a better job of putting on this wonderful show!

I was very proud of Rosa Cha who did her first Intermediare I. She felt great in the ring and could not have tried harder for me. We scored 68% and finished second. Now I feel ready for our first international CDI next weekend at the Palm Beach Derby!

Yesterday my three boys showed in their first Markel qualifier for 5-year-olds. Benefactor blew me away by performing a stellar and mistake-free test, winning with a score of 82%. That score puts him on top of the ranking list for 5-year-olds in the country so far!

Fortissimo was also amazing! He tried very hard and showed off his unbelievable gaits . We had two small 'green' mistakes and he finished second with a score of 80%.

Di Solitaire is the greenest out of the three boys. He tries so hard for me but it is a very difficult test for a 5-year-old horse and he made a few little mistakes, which put us fourth on 77% .

Anne Lavers' Colin showed fourth level for the first time and was second on Friday and fourth on Saturday. He did great! (Pictured above)

I was also riding a new horse for me, Monte Carlo, who is owned by Ellie Ball. Monte is a cool horse and he placed second on Friday in third level with 71% and 8th on Saturday.

Kymmy won second level on Rigoletto, who is owned by Sandy Retzlaff. She also came third on Hot Date with great scores and rode a nice test on Wiedermark in the PSG! Good job Kymmy!
Gracia rode in her first time at third level, finishing second in the Juniors on Independence!

-Silva
Posted by Amber Heintzberger at 9:57 AM