I finished 1st 2nd and 3rd with my three five-year-olds at the East Coast Markel/USEF Young Horse Selection Trials at Morven Park in Leesburg, VA.

Fortissimo won again today and he felt great; usually on the second day the young horses get a bit tired, but my three really stepped up to the plate. Fortissimo was especially fabulous. I’ve been changing my program at home a bit and doing more trot sets and fitness work like Boyd does with his eventers, which was great for today because they had more stamina than a lot of young dressage horses and it worked out well for me.


Fortissimo scored 10 in the walk, which is very exceptional and exciting; it doesn’t get any better than that! He finished with 8.12 which is an awesome score. His total score for the weekend was 8.0 or so and now he has an invitation to the National Young Horse Championships in Chicago in August. The top 15 in the country will go there, and anybody who would like to compete in Chicago should buy him because it doesn’t have to be the same horse/rider combination that qualified! It’s a lot of fun to compete there and he can be really competitive.

Benefactor was fabulous and he finished 2nd behind Fortissimo. The Young Horse test is a bit subjective like any test I guess, it depends on what the judges like. I couldn’t be happier with Benny, he’s a horse for the future and especially for my future and we were all happy for him to do so well. He was reserve overall and also has an automatic invite to Chicago. 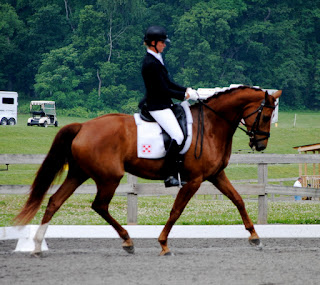 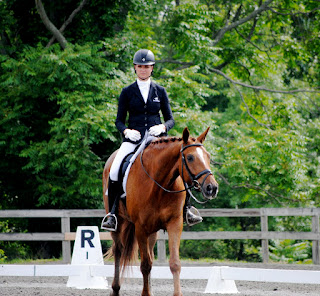 Di Solitaire was also fabulous; he’s the greenest of my 5-year-olds and he came from Holland just last year. This test has counter canter and simple changes and a lot of hard stuff and he was really great, I had a great time on him. Anne and Mike are wonderful owners and are in it for the long haul – they bought him to do Grand Prix eventually and this is an excellent start to his career. He should also be qualified to go to Chicago but I’m only allowed to ride two horses so I really hope somebody buys Fortissimo before then so that they can all go!


Rosa was fabulous too, she was first on at 8am in the Developing PSG Qualifier, also to go to Chicago. I’ve been trying to get her to have more cadence in her work - she’s a quick-thinking horse and needs to take a deep breath and settle down a little bit. She was a little bit tense in the canter and still has plenty to improve on, but she won with 68% in front of Jane Weatherwax and Jeannie MacDonald who are both high level judges. All in all it was an extremely successful weekend!

Posted by Amber Heintzberger at 6:45 AM