Well this weekend at the BLM championships has gone pretty much as planned; kicking some ass and taking some names. The amount of success thus far is pretty ridiculous, so I'll just break it down horse by horse: Melinda and Larry's fantastic horses, Duvent and Benny, stopped some shows with their performances, making Benny the 2nd level champion with a score of 77.8% and Duvent the 4th level champion with a 73%!  Silva also rode Bonnie Stedt's horse Zoran to the victory circle with a reserve champion, placing at 4th level with a 71%!

As if Silva's upper level domination wasn't enough, she also shut down the color blue for the other 3rd level competitors on Mikey, Steve Blauner's horse and one of Boyd's promising event horses, winning with a 76%.

Silva wasn't the only one to put a beat down on the competition: The other part of our equestrian family, Michelle and her incredibly talented team of riders went full speed down the road to success over past couple of days. Her young riders were inspiring, putting Tori, Hannah, and Lisa all in the top 10 in the Jr/YR division!! Michelle also put in a stellar ride on the stunning Roni earning a well deserved spot in the winners circle at 4th level with a 70%!! And congrats to Michelle's amateur riders on their bounty of success as well! 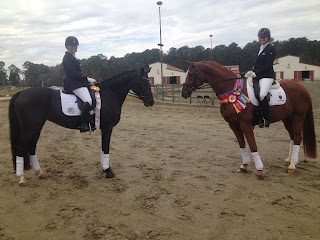 Kymmy has been laying down the law on her two wonderful boys this weekend, earning Hayden a 69% in the 2nd level championship, and double wins on Woody at training level with a 72% and 75%..insane!

Silva was not only a rider this weekend, but also an owner. Rosa's daughter Hannah Lu W made herself known in the ring over the past couple of days. She has been spectacular this weekend and is trying hard. It is truly a privilege to be able to ride such a caliber of horse, and words can't describe my appreciation towards Silva, Sarah Reece, and Boyd for the opportunity. She pulled out a 68% at training 3, (though I think we were both a bit nervous since we had to impress the owner and all;).

It's also a proven fact that the more blue ribbons you get, the more tired you feel, as shown here by the ever sleepy Hannah and Silva. Thanks to all the sponsors and owners for all that you provide for Silva that's makes living the dream possible. Hannah Lu also thanks Smartpak for those wonderful cotton sheets that keep her cozy during her frequent beauty naps.... 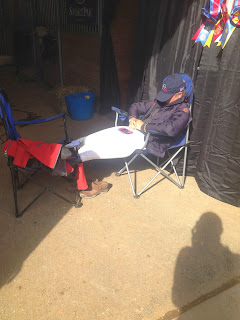 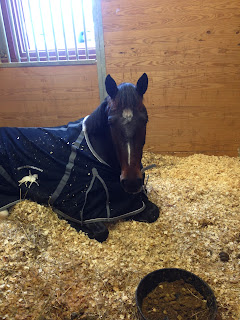 Posted by Amber Heintzberger at 11:27 AM