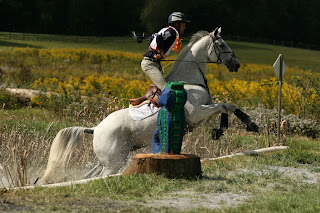 Boyd rocked the cross-country at Plantation Field today! He and Belmont II are tied for second with Phillip Dutton on Bailey Wick in the CIC*** with identical dressage scores (49.20) and cross-country time faults (5.20) for a total of 54.4 penalties. Will Coleman and Twizzel maintained their lead(45.2)

In the CIC** Boyd is leading with Bellaney Destiny, (50.0), an Irish horse owned by Debbie Kuhns that is a relatively new ride for him, though he already won the preliminary at Seneca. “He’s top class and gave me a great ride today,” said Boyd.

California native Molly Rosin, who has been training with Boyd, is in second on Havarah’s Charlie, her partner in winning the preliminary championship at the American Eventing Championships two years ago. Molly was thrilled with Charlie’s cross-country round and said that he felt unstoppable on course today.

Sally Cousins won the advanced division riding The Robber Baron, a nice reward after she and Tsunami parted company in the same division. Boyd was tied for first but was two seconds slower so had to settle for second place riding Anne Hennessey’s Benwald. Boyd wrapped things up by winning a division of preliminary riding Minotaure du Passoir, who only recently returned to competition after undergoing colic surgery earlier this year. "He's only had two starts since I brought him back and I'm ecstatic with him," said Boyd. Shatzi finished 5th in the same division.

At the end of the day Boyd said, "They were good tough, testing courses but rideable. Most of the horses jumped well and the courses caught out the horses that weren't up to it. It was a fantastic cross-country day here at Plantation Field, I'm thrilled with all five horses that I rode. This is probably the best Plantation I've been to. I've always thought of Unionville as as the best area for eventing, with all the trainers and horses here, and it's fantastic that we now have a showcase event like this."