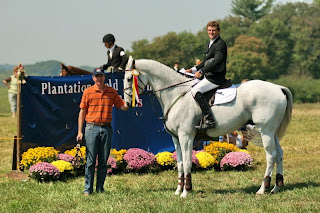 In the inaugural Plantation Field International CIC and Horse Trials, just down the road from True Prospect Farm, Boyd finished second in the CIC** with Bellaney's Destiny, owned by Debbie Kuhns, and fourth in the CIC*** riding Belmont II, owned by Kate Dichey. Boyd and Silva's students also had an outstanding weekend, with Molly Rosin winning the CIC** riding Havarah's Charlie,and Lillian Heard winning the CIC* aboard Share Option.

Silva commented after Heard's successful jumping round, "She and her horse both have a lot of talent and she has been working hard. I'm very proud of her."

Boyd hopes that Belmont II will compete in a couple of upper-level events before he sells him for Dichey. "He's soft and rideable in the dressage and has good jumping ability," said Boyd of the big bay gelding. Horse and rider have not had much time to get to know each other. "I did an intermediate on him a couple weeks ago and placed third or so, and then he just came to Silva's barn last week."

Bellaney's Destiny came to Boyd with longer-term goals, and Boyd said, "He's only been here a couple months and he's really improved. It's a shame he didn't win today, but he has shown amazing improvement."