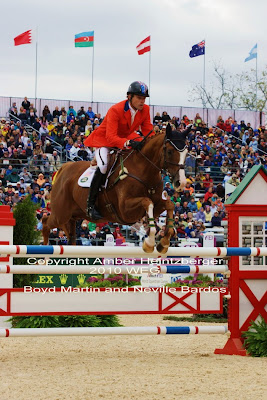 Today Boyd and Neville cantered into the stadium at the Kentucky Horse Park and under tremendous pressure gave the performance of their careers so far. With all eyes focused on them they posted a double clear show jumping round in the final phase of the Three-Day Eventing Championships at the Alltech FEI World Equestrian Games. The first of the Americans to enter the arena, they were the ones the home crowd had been waiting for and the entire stadium shook with thunderous applause as horse and rider crossed the finish line, Boyd punching the air triumphantly. 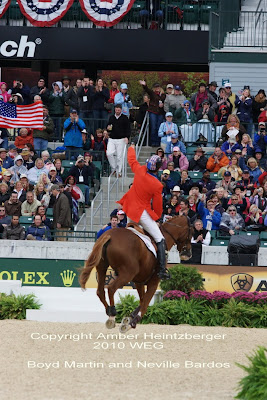 Buck and Reggie also cantered around in good form, but Phillip and Woodburn had the bad luck to bring a rail down in the final line, adding four faults to the team score. When Mandiba refused the gate jump and then knocked it down when he did jump it, the US team was solidly out of the medals in fourth place; only the unlikely occurrence of William Fox-Pitt leveling the course would have opened the door for the Americans to make the top three again, and he wasn’t about to let that happen! So the Brits took the gold, a young and very excited Canadian team took silver, and New Zealand made the long trip to the USA worthwhile by taking home the bronze. 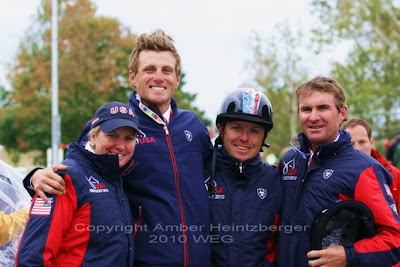 Thrilled with his personal result and his first opportunity riding on a team, Boyd says, “Neville has outdone himself; this is his best four-star score of his career. We had a great weekend and it’s been a wonderful experience that I’ll never forget. As far as the team, things didn’t go our way but even though it’s disappointing, it’s not heartbreaking. Everyone rode their guts out to the best of their abilities and things just didn’t turn out the way we wanted them to.” 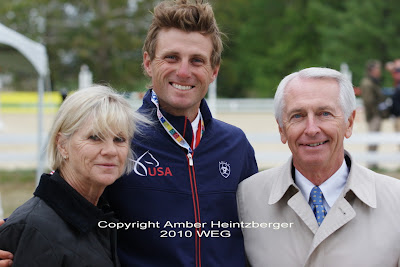 With the sun setting on the eventing championships Boyd and his family and friends will have a good party and then it’s back to work. Next weekend Boyd will compete a group of horses at the Maryland Horse Trials, including his WEG reserve horse Remington XXV, owned by Ron and Densey Juvonen, in the intermediate horse trials.
After heading back to the green pastures of Pennsylvania Neville will have a month of rest and relaxation while Boyd regroups and plans for the future. He says, “Neville’s still a young horse and has a lot ahead of him."
Posted by Amber Heintzberger at 4:41 PM