Saturday at Dressage at Devon


Stately was unreal in fourth level at DAD today, better than I ever had him, and of course he was trying his heart out. We scored almost 75% and won.


Kymmy was in the class as well and placed third- this was a very big deal, especially at Devon, and I am so proud of her because she has come such a long way.

I had Rosa in the next division and won with 72-something, which was awesome. She had one little spook and otherwise was perfect. She's always been a special horse and is getting so strong and really coming into herself.
Duvent was next and finished fourth; he needs a little bit more time but I believe he's a very good horse. It was his first time in that arena with a lot of atmosphere. 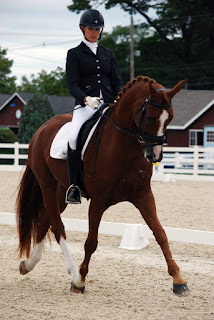 I also want to comment on how well-conditioned and healthy all of the horses are and I think we have a really good plan with the Purina feeds and SmartPak supplements. They are huge supporters and I am lucky to have both companies support me. It shows, too; I get a lot of comments on how great the horses look!

Posted by Amber Heintzberger at 8:13 AM