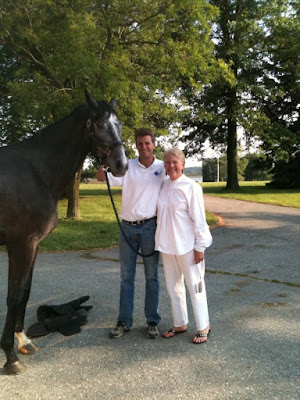 A couple of weeks ago I found a horse in Virginia, Quinn Himself, then did the clinic in NY and mentioned to Bonnie Stedt that I wanted to put a syndicate together. Bonnie’s horse died in the fire and she took the insurance money from Cagney and bought this horse. At Waredaca this weekend the owner just walked up and told me, “Here’s a present from Bonnie”!

He’s a 4-year-old by Brandenburg’s Windstar. Phyllis Dawson bred and started him – he’s a fantastic moving horse with a serious jump, and it’s a delightful gesture from Bonnie. It’s motivated me to move on from the disaster of last week and focus on what I love doing best, which is riding horses.

He’s still a baby and has never done an event. Silva gave me a dressage lesson on him morning and he reminds me a lot of Ringwood Magister: he has scope in his gaits and he’s a tall, rangy, big-boned and athletic horse.

The other good news today was that Neville and Min were released and joined Otis at Silva’s training facility in Cochranville where they are under doctor’s orders to stay on stall rest and hand grazing for a couple of weeks until further testing. Caitlin’s horse Catch a Star is the only one still at New Bolton – each day she seems to be improving and her spirits lifting more and more.