Boyd’s Colors Are Back, From Maryland To Germany 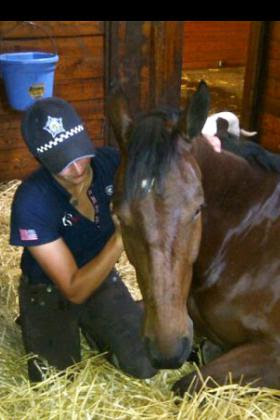 
I hear it more and more these days—“Horses will break your heart.”
I’d say with some experience that yes, that statement is very, very true. But what most also know and don’t really talk about quite as often is that riding and competing these unbelievable animals really helps you heal as well. So when everyone at TPF and Windurra USA set off to compete this past weekend at Waredaca in Maryland, I knew that it would be the first step on a long road of recovery, especially for Boyd and Woodzy.
Our feeling of unity has grown so much stronger in the past few days, and it’s renewed my faith in our family at TPF. It was nice to just take the time to watch Woodzy ride his dressage. Even with bandages for the burns on his hand, it looked pretty darn classy. Boyd also showed amazing character and strength throughout the weekend, and I know that riding is probably the best therapy of all for him.
And when I heard that Silva won all three of the 6-year-old tests this weekend at the Markel/USEF Young Horse Dressage Eastern Selection Trials at Morven Park (Va.), I was so proud. She scored in the 80s there with Aesthete (a.k.a. “Stately”), who’s owned by Faye Woolf, who lost her horse Call Me Ollie in the fire.
I was lucky to have a good weekend as well with Hard Alee and Wauwinit tying for the lead in a training division, while Zoom Zoom came sixth in that class. Indie was second in the open prelim behind Nina’s other horse, Celtic Heritage, whom Phillip rode. After spooking at the first show jump and having it down, Indie jumped great. Ollie won his novice horse division from start to finish, and Dreamboat was sixth in a training class.
After the fire, I’d say that the wind has been knocked out of my sails a bit for the Luhmuhlen trip, which we leave for on Tuesday and Wednesday. But I got a little bit of drive back when Boyd handed me his helmet cover to wear over in Germany. Though I’ll feel strange leaving TPF, it’ll be an honor to ride in his colors there.
People heal at different speeds and in different ways, and the hardest part of the healing process has just begun. To make it through the initial tragedy is hard enough, but to put one foot in front of the other and to build, brick by brick, a little at a time is a task that is daunting.
So I ask that you please continue to support my friends, whether it’s just saying hi at the horse show or writing kind words on their blogs. I was told this weekend by a friend that we need to honor the ones who were lost by continuing to love, ride and care for the ones who are still here. Not a day goes by when those amazing creatures who were lost aren’t thought of or mourned over.
Now more than ever, as John Thier would say, GO EVENTING!
Jennie
Posted by Lisa Thomas at 11:21 PM